So I didn’t catch the Bernard Hopkins-Chad Dawson fight this weekend on PPV.  4th row seats to watch my beloved Iowa Hawkeyes in action were too good to pass up.  There are no sports I put above boxing, but a fight I have low expectations for on television ranks slightly below a live football game where I have great seats.

As I’m not the kind of guy disciplined enough to avoid boxing news until I can watch a replay, the 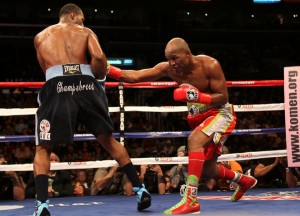 first thing I did when I got home was hit up ESPN and Twitter to find out what happened.

I was shocked to discover that due to the result of this fight, boxing as we know it was completely dead.  The fans had been screwed over for the last time, and had finally decided to never watch again.  Pacquiao-Marquez, Margarito-Cotto, and countless other great matchups on the horizon would have to be canceled and replaced with UFC cards or some other form of classless tough man contest (or even more horrifying, a simulcasted Lady Gaga concert )  because the fans had had enough.

Without even actually knowing what had happened, I was already rolling my eyes at what was obviously yet another ridiculous over reaction by the most fickle fan base in all of sports.

After watching the bout (in a totally legal manner that was in no way violating HBO’s copyrights of course) I came up with two conclusions:
1.  The fight sucked.
2.  Who cares?

Anyone expecting fireworks from this matchup was delusional to begin with; it was a contest between two generally un-entertaining boxers.  Sure, the controversial ending made it even worse, but how much better 10 more boring rounds would have been, I’m not sure.

Generally, I am the last guy to hate on a boxer for having a defensive or less than exciting style.  The Klitschkos, Floyd Mayweather, and Hopkins himself all number among my favorite active fighters.  This fight however, was less than defensive or cautious boxing, it was sloppy, disjointed action.  A buddy of mine illustrated this well when he told me that after hearing about it and watching it, there were several times when he thought the controversial tangle up was happening, but only after many awkward clinches did it actually occur.

So we had a bad fight with a controversial and sloppy ending, why am I not ready to completely give up on boxing for the rest of my life?

Well, it’s because that is completely stupid.

The NFL has bad games every week, and their fans don’t call for them to pick up shop and quit playing.  Hollywood movies are terrible at a pretty consistent rate, but nobody threatens to boycott the film industry because of whatever garbage Adam Sandler tricked them into buying.

What is it about boxing fans that makes us behave as if the sky is falling every time a fight is disappointing?  Who knows, but if I can make a plea to any of the doomsday predictors of our sport, it would be to take a deep breath and calm down.

This has been a pretty good year for boxing.  Sergio Martinez has continued to immerge as an exciting and elite fighter.  Pawel Wolak and Delvin Rodriguez treated us to a classic on basic cable.  Nonito Donaire dented Fernando Montiel’s cranium (I mean come on; in what other sport have you seen one man literally dent another’s skull in a completely legal manner?  What does it TAKE to impress you people!?) on HBO.

I cannot think of one boxing event this year that I regretted watching.  Would I have regretted paying for the Hopkins PPV if I had done so?  Even though the main event was about as bad as possible, I can honestly say no.  I may not have recommended a casual sports fan to buy it, but I love boxing.  People who love boxing know they saw something special in the undercard fight between Antonio DeMarco and Jorge Linares.  They know they saw a prospect turn into a contender with Danny Garcia’s coming out party performance against Kendall Holt.

Isn’t that why boxing is great?  Isn’t that why we pay to watch, to see something special happen live in front of our eyes?  There is no reason to expect every fight to be spectacular, but if you keep watching you will find that plenty are.  Who wants to be the person that misses the next Hagler-Hearns or Gatti-Ward because they are pissed about paying for a bad fight the last time?

Boxing has been around for thousands of years in some form, and in a form very close to its modern style for well over a hundred.  That entire time people have been calling it corrupt and barbaric and horrible and been calling for and predicting its death.  Here it still is.  In an era where boxing is “dead” Floyd Mayweather and Manny Pacquiao are making tens of millions of dollars every fight.  Despite cries of how the UFC is taking over the combat sports market, their best athletes don’t make that in a career.  In an era where “nobody watches boxing anymore” Wladimir and Vitali Klitschko are filling massive soccer stadiums regardless of the contender in front of them.

Boxing is immortal.  It cannot be killed.  Scandalous promoters and bad judges and hypocritical sports fans have tried about everything in the book to ruin it, and here it still stands.  There is something undeniably pleasing about watching an organized, fair fistfight between two human beings, and there always will be.

Now, can we be mad when a fight doesn’t live up to our expectations?  Sure, but stop short of claiming you will never buy another fight or saying the sport is finished, because you know that isn’t true.  As long as there are human beings living on this planet, there will be boxing, and people will pay to see it.

A nuclear holocaust might stop boxing, but hell, I wouldn’t put it past the cockroaches to keep it alive once they inherit the earth.  One thing is for sure, one bad fight or one hundred bad fights or one million bad fights is not going to put the sport down for the count.