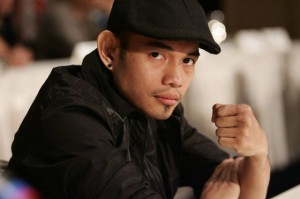 Filipino showcases his skills in the Big Apple.  This past week, Top Rank hosted a phone conference to promote the fight with Donaire, Bob Arum of Top Rank, and trainer Robert Garcia.

Donaire will be traveling to the other coast from where he lives, but Top Rank expects the gate to do well.  Arum stated that tickets are close to sold out and they expect a full sellout of a little over four thousand people come fight night.  Arum discussed why he would bring Donaire to New York away from his Filipino base in San Francisco.

“There are more than two million Filipino’s that live in the California area.  I tell them that Filipinos live all over the United States.  There are an estimated 400,000 Filipino’s living in the New York Metropolitan area and, besides, there are a lot of great, great fight fans in New York and this gives them an opportunity to see this phenomenal fighter, Nonito Donaire, up close and personal.  It’s great for Nonito, for his future that he is being exposed in the New York area.”

Donaire has already built himself a base in San Francisco and other areas of California.  In addition, he has fought in Nevada, Puerto Rico, and Foxwoods in Connecticut.  But fighting in New York at the Garden will always be a historical mark for any fighter.  New York may not be the center of boxing as it was in the sixties and seventies, but it still remains a great place for a fighter to gain exposure and build a larger fan base.

Donaire is aware of the importance of fighting for the first time in New York at the famed Madison Square Garden.  He expressed his excitement and desire to put on a great performance.

“It’s an honor for me to be fighting in Madison Square Garden.  It is going to be very exciting.  I want to go out there and prove much like I did the last fight and give out the energy.  Go out there like the old fighters did, like Jack Dempsey did and that’s what we want to do.  They gave their heart and that’s what I’m going to do.”

Building a larger fan base and providing exposure can only help the budding star.  Anyone who has seen Donaire perform is well aware of his incredible skill and even greater potential.  He brings everything to the table.  He has speed, defense, a good chin, great footwork, and the power to score knockout at any point.  In addition, he has made conditioning a priority, he has added muscle mass, and as he gets stronger he becomes even more powerful.  His crushing knockout of Fernando Montiel in his last fight is the kind of highlight reel KO that attracts fans and makes him must see TV.

While many in the boxing public were shocked at the ease that Donaire disposed of the highly regarded Montiel, the man with the win was hardly surprised stating he predicted it that way.

“I train really hard and I am really a student of the game so a lot of the punches I can see.  A lot of it I see coming and that is one of the things that gives me great defense.  Usually I set up my opponent four steps ahead.  With Montiel, I didn’t expect him to throw a looping right.  I was expecting him to throw a hook at that time.  I sat on it and when he threw the looping straight that was the biggest mistake he made because I was set up for the hook.  It gave me an extra second to be set with that hook.  It was something I set up.

“I called that.  Before going to that ring I explained to everyone how this fight was going to end.”

Trainer Robert Garcia went ahead, confirming Nonito’s prediction and expanded on his ability to anticipate his opponent.

“He sees the punches, he studies his opponents.  He knows what’s coming and knows what he is going to come back with and that is exactly what happened.  Nonito was timing that moment and it came.  Not a lot of fighters have that talent.”

While his popularity rises Donaire knows he must continue to improve his abilities in the ring.  With each fight Donaire has set a standard of not only winning but winning in impressive dominating fashion.

“I always seek to be better as a fighter, be faster, be stronger, and I always want to learn because there is always something to learn. Every time you go in that ring or you’re in the gym I always want to learn.  I think that as much as your trainer, I have a great trainer in Robert Garcia and I have my utmost respect and faith in him, in my corner.  For me, if I learn it myself I see the guys.  It’s always good to learn for yourself as much as your trainer is learning a lot from your opponent.  It’s always good to know to have the mentality of knowing your opponent.”