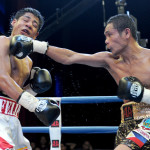 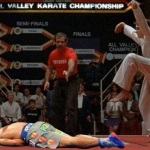 Welcome back to another edition of boxing's best bi-weekly compilation of the most blasphemous, most vomit-worthy, probably Photoshopped pictures in the entirety of the sport. If you haven't seen parts ONE, TWO or THREE - You have five minutes, go ahead...We'll wait. And now, presented to you in full 480P, in Windows 95 format, we bring to you - Boxing's Best Memes: … END_OF_DOCUMENT_TOKEN_TO_BE_REPLACED

As chief support to the farcical middleweight title bout between Gennady Golovkin and Mexican fall guy Marco Antonio Rubio last Saturday night at the StubHub Center, there was a real fight. Nicholas Walters vs. Nonito Donaire was not only a pick 'em battle of high-end fighters, it was a direct challenge to Donaire's place in the sport by a fast-rising young talent. Forget … END_OF_DOCUMENT_TOKEN_TO_BE_REPLACED 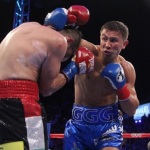 The numbers are in and, according to several media sources, this past weekend's Golovkin-Rubio HBO card was a major success, bringing in a total of 1.3 million viewers for the two-round blowout main event and, according to HBO press release propaganda, becoming the second most viewed bout on HBO of 2014. Yes, Gennady Golovkin bringing 1.3 million viewers, total, to the TV … END_OF_DOCUMENT_TOKEN_TO_BE_REPLACED

Hola familia y amigos, welcome to a balut-scented, Jollibee-sponsored edition of Kazakhstan's highest rated weekly pugilistic paper, The Sunday Brunch - We are Bill Nye's factual spear of truth that skewers your one dimensional and delusional Ken Ham flavored world view. This week we're touching on a couple of the fights that took place from the StubHub Center in Carson, … END_OF_DOCUMENT_TOKEN_TO_BE_REPLACED