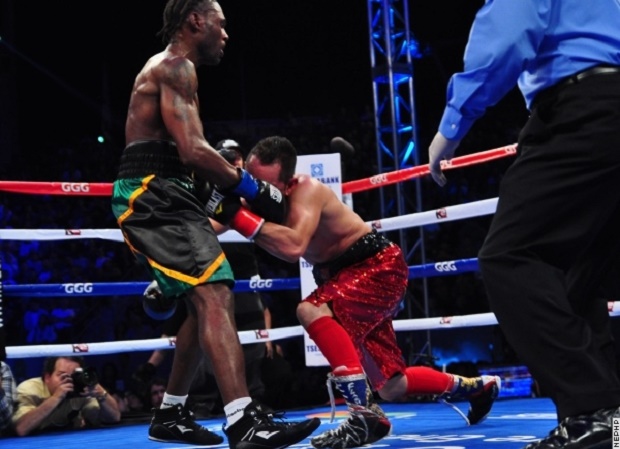 Hola familia y amigos, welcome to a balut-scented, Jollibee-sponsored edition of Kazakhstan’s highest rated weekly pugilistic paper, The Sunday Brunch – We are Bill Nye’s factual spear of truth that skewers your one dimensional and delusional Ken Ham flavored world view. This week we’re touching on a couple of the fights that took place from the StubHub Center in Carson, California. Also, we will be helping you get over your massive GGG boner with a simple-to-follow, 22-step program. So, clean up your cat’s puke and don your traditional Kazakhstani cape, we’re about to sort through this nonsense…

Saturday night, the one-time Fil-Am icon, Nonito Donaire was on the receiving end of a terrible beating at the capable hands of Nicholas Walters. The Jamaican’s power and athleticism were a gap too large to cross for the 31-year-old formerly Flashy Filipino.

Donaire, despite claiming (as most boxers do) that this was his best camp, and that he “never trained this hard…” was out-shined in nearly every category en route to being dumped to the canvas two times – for the first time in his professional journey – the second time perhaps halting his career.

Despite a very respectable battle record, the Filipino has never been the fittest of athletes. Nonito Donaire regularly comes to fight looking in less-than-stellar shape – despite utilizing the latest in scientific advances, Snacs and Intermittent Hypoxic Training (which places athletes in high-altitude simulation masks, causing them to look uncannily like Bane from the D.C. Universe).

To be honest, though, Donaire has always been (at least for most of his career) a fairly limited one-handed fighter. Over the past few years he has been mainly forgoing boxing fundamentals and aiming to land his one game-changing power punch – more often than not, crashing it home with great success (don’t read that in a Borat voice).

Nonito Donaire had generally fared well against under powered and out-sized opponents, with a few exceptions. Since he faced the exceptional Guillermo Rigondeaux nearly one year ago, however, he has never been the same whirlwind he was once lauded to be. In that fight, Donaire lost every round to the Cuban – minus the tenth – which arguably he was losing before and after the knockdown. Despite the scorecards being somehow magically close, the right man won. Afterwards, in my opinion, Nonito Donaire was likely spiraling mentally towards a bad place.

So, who is next for the Axe Man? Let’s hope that somewhere along the line a bout with Vasyl Lomachenko or Guillermo Rigondeaux materializes…Here’s to hoping, though…

After the bout, Walters had this to say: “Irie bredda, bumboclot BUK BUK” (paraphrasing).

Gennady Golovkin has caused many a fight fan to have to tuck their fight boner with little embarrassment as of late. The man carries incredible power, however is facing a really limited level of opposition.

In his latest assignment, he took on Mexico’s sacrificial lamb, Marco Antonio Rubio. Rubio, who didn’t even bother to make weight, lost his paper WBC trinket on the scales along with 100K – a small price to pay for collecting more than three times that amount in what appeared to be a straight-up white flag surrender at the first sign of adversity.

Rubio was caught on the top of the head with a decent Golovkin hook in the second, but was clear-eyed and bushy-tailed and apparently didn’t want to beat the count.

Golovkin, with all of his strengths, seems like he fights a bit reckless. The Kazakhstani is a very experienced fighter, but he can clearly be hit. I feel that once he finally gets some fighters in a higher class, he might be exposed to some problems he has been sheltered against.

For one, the walk-overs Golovkin is getting are not preparing him if he needs to go a full 12 rounds. His constantly over-matched foes aren’t helping him shore up his defensive liabilities, either – which can – and usually does, lead to a knockdown or a loss at the higher levels.

I do like Gennady Golovkin, don’t get me wrong. But, just because a fighter is personable or has good power doesn’t mean that there aren’t other factors determining their level of opponents. Is GGG the “most avoided man in boxing”? Are we sure there aren’t deeper levels of spin behind that claim? Does Chris Algieri have a prayer at beating Manny Pacquiao? I mean, he’s personable AND intelligent, right? So, what gives? Aren’t things in boxing black and white? The mainstream news sites wouldn’t lead us boxing fans astray…would they? Wait a minute…who is paying their bills? DOH!

Thanks for joining us again this week, team. Next time we’ll be taking a look at Sergey Kovalev and Bernard Hopkins with some in depth analysis and a certain level of skepticism. Here at the Sunday Brunch News Room, we stopped betting against Hopkins a few years ago, but we’re genuinely torn on this one and we will break down all of our concerns for your viewing pleasure. Send all your pro-Donaire hate mail to JESSEBOXINGTRIBUNE@GMAIL.COM and curse me out on Twitter @JESSEBOXING. Stay tuned for more Walking Dead news along with vague science and food references – until next time, sante!