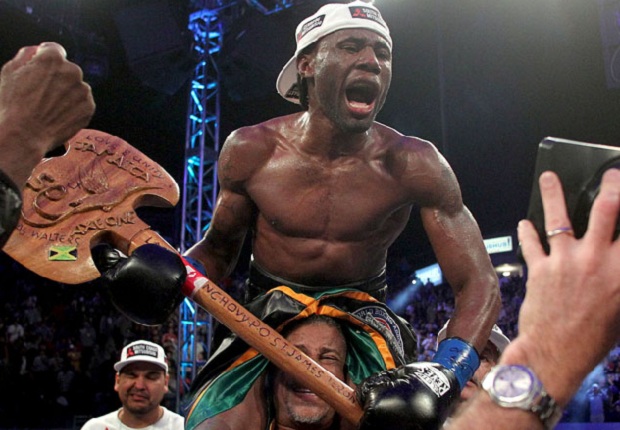 As chief support to the farcical middleweight title bout between Gennady Golovkin and Mexican fall guy Marco Antonio Rubio last Saturday night at the StubHub Center, there was a real fight.

Nicholas Walters vs. Nonito Donaire was not only a pick ’em battle of high-end fighters, it was a direct challenge to Donaire’s place in the sport by a fast-rising young talent.

Miguel Cotto recently crushed No. 1 middleweight Sergio Martinez, but nobody’s regarding Cotto as a full-time middleweight who actually intends on carrying the torch at 160 lbs.

Andre Ward beat a bunch of the top guys to become the undisputed no. 1 in the super middleweight division, but never really had that moment where he dethroned a sitting king for the honor.

Look in all of the seventeen weight classes and you’d be hard-pressed to find any divisional top dog who actually got that honor by beating the previous top dog.

Most of the time these days, you’ll get situations where the no. 1 fighter of the division moves up in weight rather than wait around for a younger fighter to come along and force the passing of the torch. Usually, these fighters end up getting beat at a higher weight, years after their prime.

It’s just the nature of the beast today. With so many title options and weight divisions, it has become increasingly difficult to corral the sport’s best into a truly risky fight.

Last Saturday was one of those rare occurrences where fans got to see a real passing of the torch as Nicholas Walters stalked, beat-up, and stopped Nonito Donaire. The heavy-handed Jamaican not only united a splintered WBA featherweight title, but also made a clear statement against the division’s biggest name and most valuable commodity. And just like in the old days, Walters immediately enjoyed some of the spoils that comes with piggybacking from the fame of conquered opponent with much greater drawing power.

The internet was buzzing throughout the weekend about Walters and his complete destruction of a Donaire who seemed focused and at least near his very best. Walters, whose previous best performance came in a fifth round KO of the faded Vic Darchinyan, will carry that Donaire-crushing buzz with him into his next fight.

That’s how it used to be in the old days when the young lions would eventually move up to destroy their predecessors. It was a beautifully brutal reflection on the real, survival of the fittest life boxers understood they were to lead– The circle of boxing life, if you will.

We don’t get much of that today. We usually wind up getting vacated titles, boardroom decisions, and excuses from our top stars. Kudos to Nonito Donaire for putting himself in a rough spot against an upcoming young star and kudos to Walters coming through with the clear, decisive victory.

Now that Walters has earned his spot among the elite, the hard road is just beginning, though. Jhonny Gonzalez, Vasyl Lomachenko, and Abner Mares await with Evgeny Gradovich, Jayson Velez, Gary Russell Jr. and a few other solid featherweights just one step behind. This should get quite interesting as it plays out. But this is what boxing should be all about. Good things happen when good fights are made.