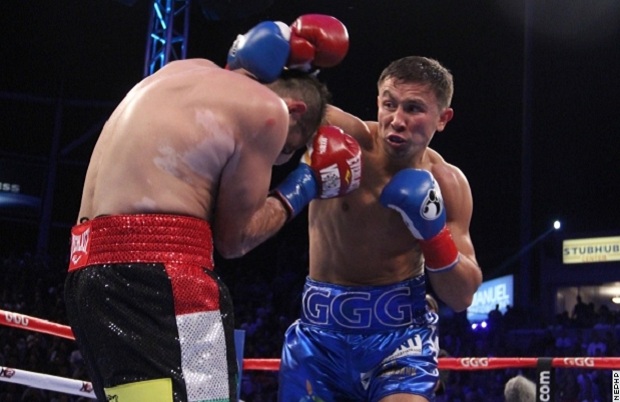 The numbers are in and, according to several media sources, this past weekend’s Golovkin-Rubio HBO card was a major success, bringing in a total of 1.3 million viewers for the two-round blowout main event and, according to HBO press release propaganda, becoming the second most viewed bout on HBO of 2014.

Yes, Gennady Golovkin bringing 1.3 million viewers, total, to the TV for the bout with Marco Antonio Rubio is quite impressive.

First, the bout, itself, was a brutally obvious mismatch that even Triple G’s staunchest supporters openly acknowledged. Second, Golovkin is a product HBO created pretty much from scratch and just ask Showtime how hard it is to do that with any sort of real success.

A kid from Kazakhstan pulling high-end TV ratings is impressive. It really is, but let’s not get carried away with ourselves. And here comes the fly in the ointment, turd in the punchbowl, or perhaps more correctly, the critical thought in the face of hyperbole.

The 1.3 million number is the calculation of TOTAL viewership, taking into consideration the live airing as well as all subsequent re-airings.

Showtime used to take heavy fire from the media for not disclosing that released Canelo Alvarez numbers were of total viewing stats and not, specifically, of the live airing.

Of course, there has been no such outrage in the media with Golovkin’s numbers being shaped similarly.

The live airing of Golovkin-Rubio drew 908,000 viewers, which is still a solid rating these days. But, put into perspective, it’s not the killer ratings KO the media is hyping it to be.

HBO’s August 2 Brandon Rios-Diego Chaves card drew 936,000 live viewers for their fight while the undercard Sergey Kovalev-Blake Caparello bout drew 990,000. HBO’s May 17 Viktor Postol-Selcuk Aydin bout, underneath the Juan Manuel Marquez-Mike Alvarado main event registered just slightly over 1 million live viewers. And there are many other examples one could use to rank Golovkin-Rubio on the high-average scale of the all-important live viewership stat.

The unfortunate thing about keeping track of TV ratings in boxing is that the breakdown of the actual numbers is not consistent. Sometimes, we’ll only get live viewership, sometimes only total viewership. Information is conveniently left off depending on the story being told by the person writing the story. So we do what we can with what we have– unless choosing to take all of our data from HBO or Showtime press releases and going along blindly with the spin.

The impressive part of Golovkin’s ratings performance was the 400,000 who came to HBO after the fact to watch what had happened earlier. Much of that can be attributed to an awesome, buzz-worthy undercard passing of the torch from Nonito Donaire to Nicholas Walters, which drew 748,000 viewers on first viewing and 1.068 viewers total, according to reports. However, Golovkin and his doings are generating generous levels of word of mouth buzz– and that’s always a good sign that a fighter’s reputation is going in the right direction. A tremendous live gate, as displayed at the HubStub Center this past Saturday, is another good sign that Golovkin’s star is growing.

The next step for HBO would be to test the live viewership numbers by booking their emerging star against someone in a “Must See Live” TV attraction.