HBO Boxing’s acclaimed 24/7 series returns to air this Saturday night on HBO. This installment will showcase the upcoming contest between Manny Pacquiao and Juan Manuel Marquez scheduled for November 12, 2011. The fight will be the third in what has been so far an exciting series in which Pacquiao has earned a controversial draw and perhaps an even more controversial win.

HBO’s 24/7 franchise has grown from an exciting, innovative idea to promote the 2007 Oscar De La 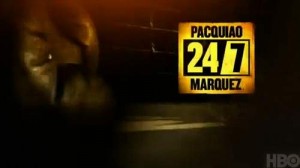 Hoya-Floyd Mayweather PPV into a full fledged, regularly appearing, Emmy winning shot-in-the-arm to the promotion of the sport we know and love.

Boxing’s biggest fights and HBO’s 24/7 go together like peanut butter and jelly.  They’re virtually inseparable. Nothing gets fans more excited about fight than the build-up the formulaic but intriguing franchise generates, and frankly an HBO Boxing PPV card without a corresponding 24/7 series would send the wrong message to intended consumers.  It’d say this PPV isn’t important enough for 24/7.

As HBO’s stable of fighters remains relatively the same as years go by, the producers can’t help but show the same fighters over and over again. For instance, this upcoming show will be Manny Pacquiao’s fifth appearance and Juan Manuel Marquez’s second. So while fight fans will learn more about fighters they already love (or hate), the warmth of seeing Pacquiao’s posse intimately gather around a kitchen table to pray, or the shock of seeing Marquez drink his own urine because he believes it will help him win a fight, cannot happen again in a fresh, exciting way.

At some point, it becomes all too repetitive.

The other problem is something perhaps more sinister. In their effort to drive PPV sales to maximum potential, it appears the producers of the show often choose to tell the story of a competitive fight even where one does not exist. For example, when a well past his prime Roy Jones, Jr. appeared on the show during  the build-up of his fight with Joe Calzaghe, fight fans were presented with a rejuvenated fighter who was back to peak form. Long minuets of how great Roy was were augmented by flashy heavy bag sessions and games of slap fighting. Roy looked unbeatable.

When the bell ran, fans expected the Roy Jones, Jr. of old. Instead, they got the one that’s just plain old.

It will be the same with Pacquiao-Marquez III. Sure, the first two fights were brilliant, but that was too many years and too many weight classes ago. The fact of the matter is that Juan Manuel Marquez has no business being in the ring with Manny Pacquai0 anymore. Unlike Pacquiao, Marquez had not carried brilliance up with him as he’s progressed in age and weight. He was uncompetitive versus Floyd Mayweather and if Pacquiao truly is in any kind of shape to give Mayweather a run for his money as most people expect he can, Marquez will quite simply be out of his league..

But don’t worry. HBO’s 24/7 won’t tell you that. The fight will appear to be surefire all-time classic. After the final episode, when you’re filled with hype and hopeful expectation, you’ll thank your lucky stars you have the privilege of ponying up your hard earned dough for a fight that probably should have never been made in the first place.