Nonito Donaire’s Saturday October 22 WBC/WBO bantamweight title defense against super flyweight titlist Omar Narvaez (35-0-2, 19 KOs) marks his 3rd fight as a bantamweight, and second straight fight televised by HBO. Donaire made a huge impact with a textbook left hook – on both the boxing world who expected a closer fight, and on Fernando Montiel who was left convulsing on the canvas when the two met in February. Donaire has been out of action since. A contract dispute and voided promotional jump have kept Donaire on the sidelines for eight months. And now that he and Bob Arum have kissed and made up, his career is set to resume. 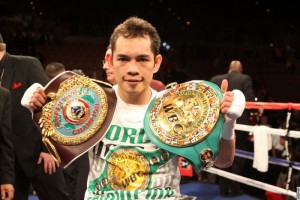 Donaire’s win over Montiel has caused a buzz greater than that caused when he first arrived on the scene in 2007. In a loaded bantamweight division, his victory over Montiel opened up doors for some big fights down the road. The bantamweight division is one of the deepest and most talent-laden divisions in boxing. Anselmo Moreno is recognized as the number one bantamweight, and Abner Mares holds an alphabet title and a superior division ranking (Wins in other divisions do not carry over when a fighter moves up or down into a new division in The Boxing Tribune’s ranking system), as tabulated by The Boxing Tribune. There is a wealth of talent on which Donaire can build his name and legacy, but he has chosen to move up in search of greener pastures after only three fights, and it looks like quick visits are becoming a pattern for the burgeoning star – for better or worse.

After making headlines with a knockout of flyweight king Vic Darchinyan in 2007, Donaire defended his flyweight title three times against serviceable opposition before returning to the super flyweight division. Despite possessing the talent to annihilate anyone in the division, Donaire took on little-known prospect Rafael Concepcion in his return to super flyweight. After an uninspired unanimous decision victory, Manuel Vargas, a strawweight and jr. flyweight (105 and 108 pounds), was called upon to be Donaire’s opponent for his February 2010 “Pinoy Power” pay-per-view headlining bout. Donaire then obliterated little-known Hernan Marquez, who has continued on with his career to capture a title, making Donaire’s victory much more valuable in hindsight.

Now, after flirting with the idea of making a move to the 122-pound weight class, Donaire confirmed those rumors yet again. “Definitely this will be the last fight at 118,” Nonito Donaire (26-1, 18 KOs) said during a recent conference call.“I didn’t expect to make 118 difficult.  The last two fights at 118 was not easy.

We definitely want to be healthy and want to be at our best so 122 is something we are looking forward to.  122 there are a lot of incredible fighters that Top Rank has at 122.  Great champions that we are willing to face,” Donaire would go on to say, making specific mention of the talented roster of super bantamweights under contract with Top Rank Promotions.

Jorge Arce, Wilfredo Vazquez Jr., and Guillermo Rigondeaux are a few of the names Top Rank would have to offer up for Donaire when he moves up to the super bantamweight division. Current WBC titlist Toshiaki Nishioka is currently the most likely next opponent for Donaire, with talks of high profile showdowns with Yuriorkis Gamboa and Juan Manuel Lopez waiting even higher. And given the opportunity to become the next obsession for a dedicated Filipino fan base, it is likely Donaire will soon become the top priority at Top Rank when Manny Pacquiao inevitably gives up boxing for politics.

For some fighters, legacy is built through a dominance of their weight class before moving on to bigger and better challenges. Depending on the individual and the challenges presented, that method won’t bring the big paydays and super stardom that most boxers desire. For others such as Donaire, who are blessed with a tall frame to support more weight as he shoots up, the options are greater.

Donaire and his handlers may take some criticism for their cut-and-run move through the bantamweight division. Like his time as a flyweight and super flyweight before it, his time as a bantamweight will be cut short. Given the challenges and opportunities that lie ahead, it is a chance worth taking, given all there is to be gained.