It’s a slow week in boxing, so time to break out something other than an interview or analysis of an 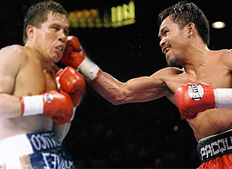 upcoming fight.  I received an email from Boxing Tribune reader Lamont recently, requesting some articles comparing a current fighter to a past fighter, something which is always a fun topic for barber shops in America that still talk boxing.

What I look to do here is a little more than just getting a current fighter vs. past fighter from relatively close weight classes and saying who would win.  I want to match two guys that would present an interesting style comparison and maybe find two fighters that would have a rivalry whether it be due to nationality, personality, or something else.

To kick this off I am going with present superstar Manny Pacquiao 52-3-2 (38 KO) vs. JC Superstar, Julio Cesar Chavez 107-6-2 (86 KO). This is a match-up that would have boxing fans salivating.  Two P4P kings whose skill is eclipsed only by their willingness to engage in a war.  In addition, it would further light the fuse between a growing national boxing rivalry between Mexico and the Philippines (a rivalry which Pacquiao has greatly increased with his domination of Mexican fighters).

Chavez and Pacquiao have several similarities.  Both  marched through multiple weight classes to obtain titles from larger foes.  Pacquiao’s rise from the smaller weight classes to his current stance in the welterweight division is well documented.  Chavez won titles at 130, 135, and 140.  Both men receive unconditional love and adulation from their respective countries while also gaining fans all over the world due to the tremendous heart they show in the ring.  In addition, Chavez and Pacquiao were very active fighters by the standard of the eras they fought in, keeping fans interested, and their skills sharp.  Finally, both men always arrive to the ring in great shape and ready to compete hard for twelve rounds.

They have their differences, though.  Pacquiao is lightning fast while Chavez, for all his greatness, would never be considered a speedy fighter.  Manny’s speed would likely bring him early success.  But Chavez may be the greatest body puncher of all time, something which inevitably will slow down a fast fighter.  Manny is more likely to take your head from shoulders but Chavez will break your ribs along with your will to fight.

So, what happens if Dr.Emmett Brown loaned his Delorean time machine to the boxing gods.  As I stated above, Pacquiao’s speed gives him the early rounds.  Much like Meldrick Taylor did in the early rounds against Chavez, the fast hands combined with in and out footwork would give the slower, plodding Chavez fits.  Pacquiao would deliver head snapping shots to the iron chinned Mexican warrior that would get the judges attention.

But Chavez had a head made of iron and would have been able to absorb Manny’s onslaught while slowly creeping into the fight as well as the Filipino superstar’s ribcage.  Chavez would start to push Manny back in the middle rounds to land thudding body shots that would slow down his opponent.  Also, Manny’s willingness to show his machismo (how many times has Pacquiao given Freddie Roach a heart attack when he lays his back on the ropes thumping his chest with his gloves saying bring it on) would play into Chavez’s hands.  This willingness to relinquish his greatest advantage of foot speed would give Chavez an opening to turn the fight in his favor.

Going into the championship rounds, Manny would have a slight edge on the cards, but Chavez would have the momentum.  So who wins?  Well, I know I am playing both sides of the fence here, but this is really how I see it.  It would be a tale of two weight classes and eras.

The 130 pound Chavez was a well-seasoned fighter that destroyed anything at that weight class.  The 130 pound Pacquiao was a very good fighter but not quite a great fighter yet.  In addition, he was still likely fighting below his best and healthiest weight.  The intangibles at this weight class allow Chavez to break down Pacquiao and win a late round stoppage.  I would see Pacquiao giving a warriors effort but the pounding to his body would cause Freddie Roach to save his adopted son from career-destroying punishment, giving Chavez the TKO.

Now. the current Pacquiao at 140-147 vs. the same weight Chavez a little later in JC’s career is a different story.  The first eight or so rounds play out the same as described above.  Manny gets the early lead while Chavez makes his move in the middle rounds.  But this Pacquiao has too much speed, too much stamina, and too high level of conditioning.  He would not be worn down at this higher weight where he is better conditioned and not starved/dehydrated.  Pacquiao is able to garner a second wind around the ninth frame and begins another lighting fast combination assault of Chavez’s face.  The iron chinned Chavez will lay down for no one and has never heard the word quit, but the blood streaming down his face from Pacquiao’s assault forces the ring doctor and referee to call a halt to the bout in the championship rounds (you didn’t think this fight could go to decision no matter who wins, did you?)  Chavez would be disappointed that it was stopped knowing he would fight through anything, but Pacquiao’s speed, skill, and stamina would give him that edge in the higher weight class.

No matter how long it lasted, or who won, this would be a true dream bout.  National pride on the line with two boxing crazy countries pitting their greatest superstars against each other.  Two fighters who care more about the show they give the fans than what happens to their health inside the ring.  Can’t-miss classic, assuming Emmet Brown would serve up the Delorean.  If you are wondering who Emmet Brown is or what a Delorean is than shut up, enjoy your youth, and go Netflix Back to the Future.

Got a comment on these comparisons or ideas for future past-present matches let me know.  As always got a question, comment, agree, disagree, or anything at all, send it to gboxing3@gmail.com.