Cuban dynamo and rising star Yuriorkis Gamboa has brought in a new weapon.   Well-known and respected 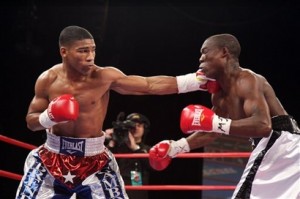 trainer Emmanuel Steward will now work the speedy featherweight’s corner.  Gamboa, who climbed the ranks quickly with highlight reel wins and knockouts, had a paper title by his fifteenth fight and is currently ranked number one by the Boxing Tribune at featherweight and basically every other ratings organization.  The majority of Gamboa’s wins have included sensational offensive performances mixed with a dangerous lack of care for his own defense.  In other words, a style that is sure to produce fireworks.

His fourth round demolition of Jorge Solis in Atlantic City earlier this year was his high point.  Gamboa battered the respected veteran with dazzling footwork and serious punching power.  But then Gamboa followed up the Solis fight with a less than sensational performance against Ponce DeLeon.

Following the last fight, Gamboa split with trainer Ismael Salas.  Then it was announced this week that Gamboa would now be trained by one of the best of the last twenty years and HBO commentator, Emanuel Steward.  Steward, an offense-minded trainer, is best known for training Tommy Hearns, Lennox Lewis,  and recently Wladimir Klitschko.

Steward has the reputation for pushing his fighters to step on the gas and go after an opponent.  He encourages smart boxing with an eye on defense, but strongly believes his fighters should not only win, but should look exciting doing it.  He has often stated in his role as HBO commentator that the sport needs more exciting and dramatic knockouts, not boring decisions.

You never can know how chemistry will work between fighter and trainer, but this appears to be good thing for Gamboa and Steward.  Gamboa can only benefit from the knowledge of an all-time great trainer who has so much experience working with the top talents of the sport and a reputation for an ability to turn a good fighter into a great one.

Questions, comments, agree, disagree, or anything at all  gboxing3@gmail.com