outside of Philadelphia.  Joey Eye is looking to become a staple of Philly boxing by showcasing young talented fighters in competitive matches.

The previous four shows have featured local fighters from Philly, Delaware, and New Jersey in the main events.  Tonight, due to several bout cancellations, the promoters had to call an audible on the fly and come up with a new main event.  In stepped WBC ranked heavy weight Franklin Lawrence of Indianapolis Indiana to fill the top spot taking on Raymond Ocheing of Nairobi Kenya.  Lawrence is ranked 14th by the WBC after recent KO wins against Jason Estrada and Lance Whitaker.

The confident Lawrence, who hooted and yelled like a hunting animal entering the ring, wasted little time dispatching his overmatched foe.  Early in the first round the wild big man dropped his Kenyan opponent to the canvas with a thudding right to the body.  When Ocheing got up Lawrence ran right back in, bounced another right off the body and watched Ocheing drop to the ground for a second time.  Ocheing got up again, but needed to run around the ring just to survive the round.  The end was clearly coming fast which made my fellow boxing writer to my right happy because he wanted to get home for game seven of the World Series.

Lawrence pounced in round two to oblige those who wanted to catch the baseball season finale.  The bruising puncher landed a smashing right to the ribs that could be heard around the ballroom. The punch caused Ocheing to jump and then begin running away from Lawrence in circles around the ring.  Despite Ocheing’s efforts at running track, Lawrence easily chased him down and hit him with a bomb of a right hook to the temple that sent Ocheing to the canvas for a third time.  Referee Gary Rosato had seen enough waiving it off without a count at 31 seconds of round two.  Lawrence goes to 17-2-2 (12 KO) with Ocheing falling to 23-15-3 (18 KO).

Lawrence spoke with this writer after the fight and assessed his performance.

“It was an A plus.  It was scheduled for eight and knocked him out by the second round.  He should have been gone in the first with the two knockdowns but that third one, he couldn’t take no more.  I could have knocked the man down a hundred times.”

Lawrence further expressed his displeasure that he is not getting the chance to fight the top heavyweights.

“Jonathon Banks is running from me, Klitschkos are running from me, I mean, what can I do?  I should just go up there and knock them out in the locker room or knock on the fucking front door.  Take you with me (yes, me is yours truly standing all of 5’ 7” and 142 lbs. Franklin is ready to take the Klitchkos with only this guy on his side) and we get in on the news, fly over to Germany and say let’s do it.  I’m about ready to send a message to them.  I think they don’t want to get in there with a guy that is not as known as them and fuck around getting destroyed by a known unknown but it don’t fucking matter.  I’m the baddest and they know I’m the baddest.  If they want some real fucking competition, step up.  I’m not going to be like Mayweather dodging fucking Pacquiao.  I’m a fight anybody, especially when it’s time to bring the belts home and it’s time.

So what does Lawrence have to do to get the top guys in the ring?

“Keep knocking these bums out.” 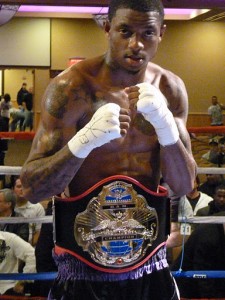 round super middleweight fight.  The bout was for the BAM title standing for Boxing Association of Machismo (otherwise known as the Bad Ass Motherfucker title).

The southpaw Webster started out strong controlling the first two rounds behind a stiff jab and sneaky left uppercut.  Goyco came on in the third round using aggression and pressure to get him into the fight.  But in the fourth the favorite Webster returned to his jab and took back control and momentum of the fight.

But Goyco was not done yet.  Knowing he was behind on the cards he showed heart going after the knockout with full force in round five.  Goyco fired his right hand at Webster, whose desire to drop his lead hand while simultaneously hanging his chin in the air provided a fine target.  Goyco went after the bulls eye but never could fully zero in.

The Philly fighter had his best moments in round five with that right hand but Webster again took back the fight in round six.  Despite Goyco’s efforts Webster’s jab, reach advantage, and boxing skills were too much.  The final scores gave the night to Webster 59-55 twice and 60-54 (BT had it 58-56 giving the third and fifth to Goyco).  Webster stays undefeated at 11-0 (6 KO) while Goyco falls to 4-3 (2 KO).

Recent Temple University grad and Philly fighter, Alex Barbosa took home his first win in his pro-debut.  Barbosa controlled the first round against Brian Gonzalez who traveled all the way from Puerto Rico to Chester PA for the four round bantamweight bout.

Then, in round two Gonzalez regretted his trip to the states.  Barbosa hit Gonzalez with several body shots with some landing in the rabbit area.  The backside shots were as much a product of Gonzalez turning his back as Barbosa hitting cheap.  Gonzalez complained to referee Gary Rosato who had no sympathy and ordered him to fight on.  Barbosa landed several more body shots with Gonzalez still giving his back to his opponent.  Gonzalez 0-2 finally dropped to a knee and indicated he had no desire to continue.  Barbosa 1-0 (1 KO) gets the TKO win at 2:30 of round two.

Anthony Young of Atlantic City, NJ had an impressive debut scoring two knockdowns and taking a unanimous decision over Kywame Hill of Philadelphia in four rounds of welterweight action.  Young floored his man in the first round with a big left hook and again in the second with a straight right.  Young 1-0 dominated the rest of the bout against the overmatched opponent and won by scores of 40-34 twice and 40-33 (BT had it 40-34).  Hill, who was listed on the promoter’s bout sheet as veteran of nine fights, falls to 1-9 (1 KO).

Joey Tiberi 6-1 (5 KO) opened the night putting a short and fast beating on Mike Maley 4-9 (3 KO) of Whiting IN.  The Newark Delaware native who sported a rabid section of fans cheering him on floored his opponent with a right hand seconds into the bout.  Maley got to his feet but was a helpless soul as Tiberi pounced like a rabid dog to finish the job.  Referee Sean Clark called a halt to the carnage along the ropes at only 40 seconds of the first round.  The lightweight bout was scheduled for four but never had a chance to get close to the scorecards.