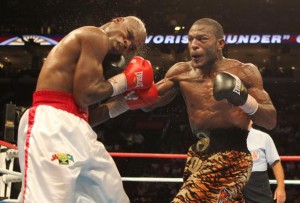 — Canadian middleweight prospect, David Lemieux (25-1, 24 KOs) will be fighting for the first time since his TKO 7 loss to Marco Antonio Rubio in April. He will be taking on former junior middleweight world titlist, Joachim Alcine (32-2-1, 19 KOs) at the Bell Centre in Montreal, Quebec, Canada on December 10.