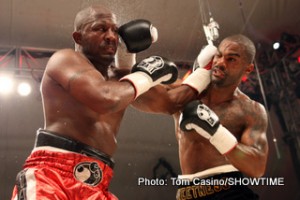 November 5th on Showtime.  The fight will take place in Quebec City, Canada and coverage begins at 9pm ET/PT.

At 32 years of age, Green is a mainstay in the super middleweight division and is ranked 16th by The Boxing Tribune.  He’s a former participant of the Super Six Tournament, holds a two inch height advantage and has a four inch longer reach.  Green lost two of his last three fights:  one to Glen Johnson by TKO and the other to Andre Ward by decision.  His other loss comes by way of UD to Edison Miranda.

Demers is a 31-year-old Canadian fighter who holds a similar record to Green but with half as many knockouts.  His last two fights resulted in losses by KO and TKO.

This bout takes place on the undercard of Showtime’s main event where Lucian Bute will make his 9th title defense against Glen Johnson.