Saturday nigh,t junior middleweight punchers Alfredo Angulo and James Kirkland will square off in Cancun, Mexico.  At stake is a possible shot at WBC champ Saul Alvarez.  Also both fighters have reputations they are looking to rebuild. 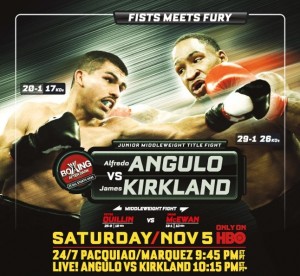 Angulo suffered a long layoff after visa issues did not allow him to enter the states.   Kirkland spent time in prison following a probation violation and then a shocking KO loss to Nobuhiro Ishida.

Now, several categories below will be considered useless to speak of because the plain fact is that with Angulo and Kirkland nobody is coming into the ring to get cute.  These two are stepping through the ropes to go to war with very little thought to the finer aspects of the sweet science.

If you watch boxing due to a morbid urge to see men senselessly beat each other you have found the right fight if you tune your TV to HBO this Saturday.  So, without further rambling let’s get to the specifics of breaking down Angulo vs. Kirkland.

Boxing ability: Neither fighter is going to win the Juan Manuel Marquez-Nacho Beristain technical fighter award.  Kirkland has a berserker style attack that is anything but proper boxing technique.  His hands often stray low, his punches are wide leaving himself open for counters, and he charges straight in.  Angulo is not a great boxer but his technical skills are underrated.  He employs a high guard that is at times effective.  His punches come straight and he mixes up his body and head attack well.  Angulo is the better boxer in this bout.

Physical: This is even in a differing way.  Kirkland, when trained by Anne Wolfe is a physical specimen that has great endurance and conditioning.  Angulo does not have the look or physique of an athlete but he does have very good stamina and his recent conditioning work has improved his physical conditioning.  Not to mention both men have heart and will keep going mentally even if their bodies fail them.

Power: This is where this fight is fun and interesting.  Both men have high KO ratios (Angulo at 81% and Kirkland at 87%).  Both fighters strive to score a knockout with no desire to allow a fight to see the final bell.  Kirkland does not possess true one punch knockout power.  He relentlessly attacks his foe, sits down on his punches, and systematically breaks them down over the fight (see Joel Julio for perfect example how Kirkland broke him down over six rounds forcing the stoppage).  The difference, Angulo has the same ability but also possesses one punch KO power.  Angulo can wear you down or change the fight with one punch turning the lights out.  He did this to Alcine, Yorgey, and a host of other challengers.  Angulo gets the edge with his difference maker the straight right hand bomb.

Speed: Neither guy will dazzle with blazing speed.  Angulo basically plods and speed will never be an attribute for him, although his punches have decent zip when he fires from a distance.  Kirkland pressures well with good foot speed  but his punches don’t have much zip.  Kirkland gets the nod in speed but it is not enough to be a real factor in the fight.

Defense: Don’t worry about it, it won’t matter.  The only defense Kirkland has is relentless offense.  Angulo uses a high guard but still eats plenty of leather.  At some point, sooner rather than later, these two will resort to trading shots mano a mano with no regard for defense.

Chin: Power makes this fun, the chin will make the difference.  Let’s get something straight first.  Kirkland’s chin is not as bad as it appeared in the Ishida fight where he was dropped three times in round one en route to a KO loss.  He was drained and overworked in that fight.  Against Julio he ate a ton of shots and shrugged them off.  But his chin is not rock solid either.  He has been dropped and hurt before including against lesser fighter Alan Conyers.  Angulo has the classic Mexican iron chin.  He can eat nearly any shot and just moves forward as if a fly had buzzed in his face.  As I said above, these two will inevitably stand and trade.  When it happens the man with the iron chin will be standing while the other fighter will hit the deck.

Experience: Even.  Kirkland has ten more fights but both have faced about the same amount of quality opposition.  Besides, this will not be a fight won on experience or craft learned in the ring.  It will be won on toughness and punching power.

Wear and Tear: Both have taken some punches but neither guy has taken a career changing beating.  Kirkland’s loss was a quick KO where he still had his senses when the fight was stopped.  Angulo’s one loss was from being out boxed by Cintron.

Intangibles: The fact that the fight is in Angulo’s home territory of Mexico has to be taken into account if this goes to the cards.  Don’t worry, this fight will not reach the scorecards.  The judges can take the night off.

Alfredo Angulo: Angulo matches up well with Kirkland.  He can pretty much use his normal game plan of trading punches and come out victorious.  Here are the basic keys for “The Dog:”

James Kirkland: The problem here is that Kirkland does not have what is necessary to beat Angulo.  This is just simply a bad matchup for him.  Angulo can be frustrated and defeated by a fast moving boxer.  You need a commitment to using the jab for three minutes of every round to slow Angulo’s pressure.  You need to be a crafty boxer who works in and out, attacks on angles, and has the ability to land combinations and get out of harm’s way immediately after you are done punching.  Kirkland is not that type of fighter.  That being said I will play trainer and state what Kirkland can try and do within his style to win Saturday night.

Prediction: This fight is simple and it is not.  It is simple in that it is assumed that Angulo is a big puncher against Kirkland who has a soft chin.  It is not simple in that Kirkland is far better than he is given credit for in his KO loss to Ishida.

In the end this is simple though.  For all the possibilities, this will come down to two guys who will sooner or later stand and trade to land vicious shots.  One guy has a great chin while one guy has been knocked out once and dropped several times.  When that moment occurs, both will land, but Angulo will be standing when Kirkland hits the ground.

Watch the second half of round three of Kirkland vs. Joel Julio.  Kirkland abandons the jab and trades shot for shot with Julio.  In that fight he got the better of it but when (not if) he does this with Angulo, it will be a mistake.  Julio landed while backpedaling and gave up his power.  Angulo will not go backwards for anyone.  He will plant his feet and fire with full weight behind his shots causing serious damage while shrugging off Kirkland’s shots.  When Kirkland rushes in, he goes straight forward with no angles and does not move his head.  Without those key techniques he cannot avoid Angulo’s straight crisp punches which will sound the end of this highly entertaining fight.

Alfredo Angulo wins a thrilling aggressive fight by knockout in round four.

Past fights: For Angulo his fight with Cintron, while he lost, showed how tough and resilient he is no matter what.  It does lay  a blueprint for how to beat the dog, but the ability to stick and move while avoiding relentless pressure is far easier said than done.  The Yorgey fight shows his raw punching power that results in a devastating KO (side note, how was this fight allowed to continue as long as it did when Yorgey was darn near out cold on his feet getting destroyed I will never know).  Unfortunately one of his other performances I wanted to include against Joel Julio was not available on youtube.

For Kirklan,d the Ishida fight is a given that it shows his flaws.  The fight vs. Julio shows Kirkland at his best but also shows that even at his best he has serious defensive flaws that will cost him against Angulo.

The odd thing in watching the fights was the Angulo loss against Cintron and the Kirkland win over Julio fully convinced me that Angulo will win the upcoming bout.  Angulo has everything to do what Julio cannot and Kirkland does not have the movement and skill Cintron used to defeat Angulo.

Alfredo Angulo vs. Kermit Cintron (feed is not great at first but it clears up fast)