Standard protocol in matchmaking dictates that promotional stablemates only fight one another when there’s massive money involved and, usually, after a considerable build-up over the course of years. 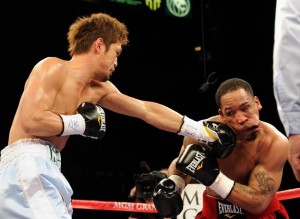 It doesn’t make business sense for promoters to have two of their stars rip into one another without some serious cash on the table. As long-time fans of the sport know, boxing is, above all, a money-making venture and things like “dream fights” and “fan favorite wars” take a back seat to the almighty dollar.

So, when two relatively well-known twenty-something sluggers with the same promoter and same co-manager (Cameron Dunkin) are booked against one another in a small-money fight with not even a world title attached, it’s a tip of the hat that one of the fighters is considered damaged goods.

Back in 2009, when James “Mandingo Warrior” Kirkland was knocking ’em out and “El Perro” Alfredo Angulo was grinding ’em down, fans eagerly awaited the moment when both junior middleweight demolition kings would meet one another in the ring.

It was a dream fight for hardcore fans and one that seemed too good not to happen, even though Angulo was doing his thing at the time under the guidance of old promoter, Gary Shaw.

Immigration issues have banished “El Perro” back to Mexico and Kirkland, after serving a two-year prison term for parole violation, is no longer regarded as the modern day 154 lb. Mike Tyson.

While both fighters have suffered significant career set backs, Kirkland has been the only one to bring those woes to the ring.

Then Wolfe came back into the picture, bringing back her unorthodox training methods, like two-on-one sparring and 14-mile desert sprints, with her. Wolfe’s focus is light on technique, but heavy on mental and physical toughness. Whereas other trainers work on turning their clients into fighters, Wolfe works on molding them into warriors who break camp ready to walk through walls and devour opponents whole. It’s a debatable philosophy when it comes to big-time, elite level prize fighting, but Kirkland, with a tendency toward life-altering, out-of-ring distractions, thrived under Wolfe’s boxing sadism.

Students of boxing history know what happens when offensive beasts get tamed and their terror-inducing mystique fades away. It usually means a quick decline and a violent demise from boxing’s main stage.

Since making his return in March of this year, Kirkland has been buzzed by journeyman, Jhon Berrio and knocked down three times en route to the TKO 1 loss to Ishida one month later. Overall, the Austin, Texas native has looked sloppy, awkward, and unfocused in his five post-prison fights– a mere shell of the fearsome slugger who walked right through legitimate challengers like Joel Julio and Eromosele Albert. Even in his last two bouts, under the return guidance of Wolfe and against hopelessly over-matched opposition, Kirkland has failed to really impress.

Post-Ishida knockout, Golden Boy has made an effort to shield their fighter from anyone who could conceivably hurt or even challenge him. And now, they’ve gone from no-hopers like Dennis Sharpe and Alexis Hloros to a real, legitimate elite junior middleweight in Alfredo Angulo. That’s a mighty large leap of fate and it certainly gives the impression that the promotional firm has lost hope in their fighter and is simply selling him for scrap.

Since adding Angulo to their promotional stable, Golden Boy has not been secretive about their big plans for the all-action Mexican fighter and a name like Kirkland would be an excellent resume-filler for a fighter looking to be pushed to that next level of stardom. The fact that Kirkland would likely go down via spectacular KO can only be considered a plus from a promoter’s perspective.

When it comes to Kirkland, there are a lot of questions that remain unanswered: Has he been the victim of ring rust? Was Kenny Adams a poor fit as a trainer? Did he miss Anne Wolfe’s training discipline? Did the two-year lay-off strip him of that magic “x-factor?” Did Ishida just get lucky with one big shot on Kirkland’s soft spot?

The questions could go on and on, but from Golden Boy’s decision to match a mixed-up and vulnerable Kirkland against one of their top performers, it seems that they’ve given up on trying to find any of those answers.