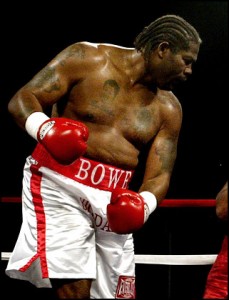 what seems like a comically long lay-off from arguably the toughest sport there is to make a come-back in.

Bowe has fought only three times since he first retired from boxing way back in 1996.  In 2004, he shook off the rust to take on club level fighter Marcus Rhode, a boxer with 25 losses.  He then eeked out a split-decision over journeyman Billy Zumbrun in 2005 before completing the seldom seen former-champion-versus-palooka trifecta by taking a decision win over 12-loss superstar Gene Pukall three years later.

And now he’s coming back for more.

But don’t assume he’s back to simply pick off wannabe Rocky Balboas this time.  Nope, Riddick Bowe is aiming much higher this time – the very top.  Riddick Bowe wants to fight a Klitschko.

During a recent interview with The Huffington Post, Bowe let loose some real gems.  I mean this is interview gold, people. GOLD.

Speaking about Wladimir and Vitali Klitschko, who together own every heavyweight championship belt that matters and haven’t lost since 2004, Bowe said this:

“In six months they’d give me a good fight,” Bowe said. “In a year, I’d just whoop them. A lion recognizes a lion. Them boys is sheeps.”

Yes, he said that.  He also indicated he wanted to fight both of them within three months of each other back to back.

To be fair to Bowe, boxing really hasn’t changed all that much: the best fighters still win and the heavyweight division is no different than it ever is.  The only real difference between now and when he held the title is that then he was an active, professional competitor in the prime of his life, while now he’s a good-natured but seemingly delusional former champion still thinking he’s anything like he was back then.

Say what you want about Evander Holyfield, at least he’s been in shape and active all these years.  Riddick Bowe?  Not so much.

The best part of the interview was what seemed to be driving Bowe to brink of this madness.  Speaking about his last fight (you know, the one against a 12-loss fighter way back in 2008) he had this to say.

“I had my last fight in Germany, and that’s when I was on the Klitschkos’ undercard,” Bowe said. “One of them called me Grandpa.”

So I’ve been over this time and time again, and knowing the level of dignity, class and respect the Klitschko brothers show both the sport and its former champions, about the only way I could actually see that going down is if Bowe caught one of the brothers unaware with some ill-advised and inappropriate verbal jabbing trying to goad them into a fight.  At that point, I could see either of the brothers, almost in disbelief over what just happened, saying something like: yeah, right – grandpa.

But for argument’s sake, let’s give Bowe the benefit of the doubt, because he had one more gem to give in the interview.

Does Riddick Bowe know what “tap that ass” means?  Because I’m pretty sure he doesn’t.  I really hope he doesn’t.

It really doesn’t matter, I suppose.  Either Bowe is so out of touch with reality that he still lives in a past where the phrase “tap that ass” has no sexual connotations whatsoever, or he’s literally gone totally and completely insane enough to believe he just took trash talking to a whole new level.

Either way, I think Riddick Bowe should stick around a little.  He can talk some noise, maybe take a couple more fights against C-level competition to stroke his ego.   He can sign a few autographs, remind people what a really great fighter he was in the 1990s and say funny things like “tap that ass” for us to cringe over.  I’m good with that.

One thing is absolutely clear, though.  Riddick Bowe should never, ever fight a Klitschko brother.  Ever.  Not today.  Not next year.  Not ever.

Riddick Bowe was an excellent heavyweight champion.  In his prime, he would have given anyone in the history of the division all they could handle.

But Riddick Bowe was a product of God’s gifts to him.  He was never known for his hard work and dedication.  He was the type of fighter who didn’t like to train and couldn’t push himself away far enough from his vices to be the best he could be.

He is who he is, and who he is today is the older, out of shape version of the guy who enlisted in the Marine Corp after he retired from a sport he did not like to train for only to quit because it was too hard.

Kelsey McCarson actually favors Riddick Bowe over at least one of the Klitschko brothers in a prime vs. prime match-up but will never tell you which one unless you follow him @TheRealKelseyMc on twitter and ask.