Centro de Cancun, Cancun, Quintana Roo, Mexico– In a brawl that matched all the high 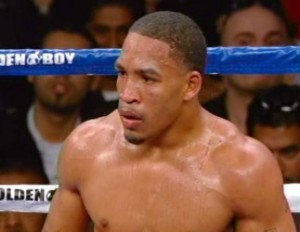 The pace was set in the sizzling first round with Kirkland getting dropped hard from an Angulo counter thirty seconds into the bout. Angulo pounced on his dazed opponent, ripping Kirkland’s body and head, but was unable to put the finishing touches on the contest. With about a minute to go in the first round and with Angulo apparently punched out, Kirkland made his comeback, battering the Mexican with a hellacious barrage of shots that would send the stunned “Perro” to the canvas.

From the second round on, the bout was all Kirkland as the Austin, Texas native stalked Angulo, landing big shots, both upstairs and downstairs. Angulo would attempt to make some changes and rally a comeback, but his legs never got back into the fight after the brutal first round and he was clearly running on pure toughness and determination for the rest of the bout.

With Kirkland seemingly getting stronger and Angulo exhausted, fighting in slow motion, the result was all but etched in stone and made official when the referee stepped in to save a battered Angulo at 2:01 of the sixth round.

For Kirkland, the victory means a return to the top of the 154 lb. division after a tough three-year stretch that saw him serve a two-year sentence for parole violation and then get stopped in one round by light-hitting Nobuhiro Ishida just a month into his post-prison comeback.

The bout was officially designated by the WBC as a “semi-final” eliminator, but it’s unclear what that means or how that affects Kirkland’s chances at WBC 154 lb. titlist, Saul “Canelo” Alvarez.