Boxing has a way of getting fans excited about something that just isn’t there. 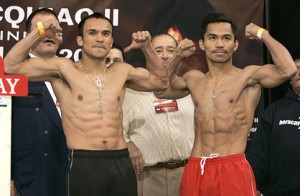 Case in point, the hype machine that is HBO’s 24/7 has fight fans again hopeful for an epic clash between two great warriors: Manny Pacquiao and Juan Manuel Marquez.

And why shouldn’t it be?

The first two bouts were highly contested all-time classics.  Pacquiao came out of it with a win and a draw against his rival, but if you put ten fight fans in a room and ask them to judge all twelve rounds of the two fights, you’ll be hard pressed to get more than five of them to agree that one fighter clearly won either fight over the other.

They were that close.

But boxing, the best and worst of sports, can be quite deceiving. And yet again, what we see is not what we are going get.

Save your money, people.  This is a mismatch.

Manny Pacquiao is too big, too strong and too fast for Juan Manuel Marquez.  Any chance Marquez had to defeat his rival went out the window when a catch weight of 144lbs was established for the fight.

For reference, the first fight was fought at 126lbs while the second one was at 130lbs.

And while both fighters have gone up in weight, as is natural as a fighter ages, Pacquiao has carried his dominance all the way up 150lbs while the success of Marquez has been limited to 135lbs and below.

Trust me on this.  It’s a mismatch.

Let’s put it this way: there is a strong argument from fight fans that Manny Pacquiao would be Floyd Mayweather’s strongest competition.  Whatever door you come of as to who would actually win the fight, you’d be hard-pressed to find anyone disagree with that.

Yet when Marquez ventured up to 147 to fight Mayweather, he not only lost the fight but was virtually uncompetitive.  It was a complete and total mismatch — not because the skill of Marquez couldn’t match his opponent’s skill, but because Mayweather was just too big and too fast.

Which is exactly what Manny Pacquiao is now, too.

Look, you can’t believe both.  Either this PPV is a bunk mismatch bilking fans for even more of their hard-earned cash, or Pacquiao simply won’t be the competition we all think he’ll be against Mayweather.

For my sanity’s sake, I’m sticking with the the former.  I just can’t believe a fight we’ve waited all these years to see won’t be any good.  In fact, I refuse to believe it.

But this fight is a mismatch.

It’s just another cog in the wheel of PPV millions Top Rank and company have masterfully crafted for Filipino superstar, Manny Pacquiao, before the coup de grace that will be the proposed May 12, 2012 Pacquiao vs. Mayweather mega-fight.

But this one’s not.

So save the rest of your 2011 PPV budget for Cotto-Margarito II.  Or save it and put it towards the hopefully inevitable clash between Manny Pacquiao and Floyd Mayweather.  Or give it to the poor.

Whatever you do, don’t buy this one hoping for a competitive fight.