This Saturday Manny Pacquiao 53-3-2 (38 KO) and Juan Manuel Marquez 53-5-1 (39 KO) will square off for the third time to finish their bitter rivalry.  The first two fights are highly entertaining and highly controversial.  Their styles mesh to perfection.  Pacquiao’s hard charging aggression vs. Marquez’s technical boxing and counter punching abilities.  During each of the first two fights they traded 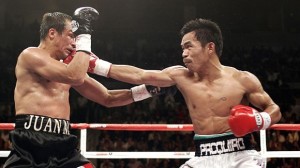 incredible power shots being kept alive only by great chins and a desire to be victorious.  The first ended in a draw and the second was awarded to Pacquiao by narrow split decision.

Each fight has nearly four years in between.  They first met at featherweight in 2004, again at junior lightweight in 2008, and now will meet at welterweight (catch weight of 144lbs) in late 2011.  Both proud men want to settle the score once and for all and show who is the better man in this rivalry.

Before the fight Saturday night we take a look back at the first two bouts.  In the first installment we looked at the first bout and will now check out the second fight in 2008 at junior lightweight.  I will be on the email all week checking for comments from readers where I am sure there will be plenty to argue about in my opinions below.  Or feel free to light up the comments below or the Boxing Tribune’s Facebook page http://www.facebook.com/theboxing.tribune.  Nothing like some barbershop arguing before a big fight.  Now lets’ get into the rematch.

While the crowd was at a fever pitch for the (mostly for Marquez chanting his last name and Mexico-Mexico) the fighters were more cautious in this second meeting.  Round one was far more tactical than anything in the first bout with only one good power punch (a big right) landed from Marquez with Manny landing a few grazing shots.  Feeling that any round should be earned in this difficult rematch I score round one even (I should note all three judges and Harold Lederman of HBO gave it to Pacquiao).

Round two is very difficult to score in that Manny seemed to control the round but Marquez landed some very clean left hooks punctuated at the end of the round with a big left hook in the closing seconds that staggered Manny.  I give it Marquez on landing the only shot that was eye catching to steal at the end.

Round three signaled time to dispense with the pleasantries and fight.  Marquez landed another big right early.  At this point it was clear that Marquez is the more disciplined, tactical, controlled and balanced fighter.  But just when it appeared Juan Manuel would use these abilities to control the fight, the power of Pacquiao came out.  Following two head clashes where neither man would touch gloves even though referee Kenny Bayless instructed them to do so they began letting their hands go to firing away.  Pacquiao attacked and Marquez countered.  Then with less than thirty seconds to go Marquez made a rush inside and a perfectly timed Pacquiao straight left landed on Marquez’s chin sending him to the canvas.  Pacquiao takes the round and as everyone knows this knockdown became the deciding factor on the judges’ cards when all was said and done.  Marquez was clearly dazed as he walked towards the wrong corner at the end of the round.

Round four Pacquiao controlled the ring and forced his fight.  He moved forward and got the better of the action despite a few decent counter shots from Marquez.

Round five was close.  Marquez took the round in that he controlled the tempo making it his fight and landed several significant straight rights and left hooks.

Round six Marquez established his boxing and counter punching.  It seemed no matter how fast Manny fired, Juan Manuel avoided being hit and landed the appropriate counter shot.

For two minutes round seven was slow.  Then an accidental clash of heads produced a cut on Marquez.  The blood fired up both fighters as they traded shots in the final minute producing exciting action.  While that last minute was fought at Pac-man pace, Marquez takes the round.  He landed the cleaner punches in that last minute and was in position to control the action as Pacquiao got over excited diving in leaving himself open for the boxers counters.

Round eight was probably the best round Marquez had in the two fights.  He moved forward fighting Manny’ fight and dominated the action.  He landed every key punch he throws (jab, straight right, left hook, and uppercuts from both hands) to batter his opponent.  In addition he opened a good cut under Manny’s right eye to seal the round.

In an intense round nine both men landed hard shots (what else is new at this point) but Manny did more and takes the round.  Just when Marquez seemed to be gaining momentum Pacquiao comes back.

Fireworks coming in round ten.  Manny lands a huge left early in the round that fully staggers Marquez returning things to a back and forth brawl.  They traded away igniting the crowd for the first half of the round.  At this point both men are bleeding from their right eyes and things are very heated.  The second half of the round understandably slows and Manny walks away banking the round on his early success.

So we enter the championship rounds.  Both men have had ups and downs.  Both have forced the fight into their styles.  Momentum has swung several times.  Pacquiao is cut and his right eye is closing.  Marquez is bleeding heavily from several spots including a thick cut over the right eye.  Yet both men show no signs of quit and are ready to battle it out in the closing rounds.  To start round eleven Larry Merchant stated, “Blood is drama, we have blood, we have drama.”  Well said.

Round eleven was very tactical and tough to score.  It was as if they both knew they needed the calm before the storm of the final round.  I saw Marquez land several clean counter shots to take the round, but like many rounds in the two fights, it could go either way.

Round twelve Marquez took.  In back and forth exchanges the tactical Mexican got the better of the action landing several hard straight rights and right uppercuts.  Manny kept coming forward to press the action and thrill the fans but Juan Manuel’s tactical brilliance took the round.  Jim Lampley closed the show stating, “One more right hand from Marquez, one more combination from Pacquiao, they trade shots down the stretch.”  At the bell both men raised their hands feeling victorious.

I have Marquez winning both fights by the slimmest of margins.  I fall into the camp that feels Juan Manuel deserved at least one victory in the two classics.

As I look to the third fight on Saturday I find it hard not to be excited for another great bout.  Maybe because I have sat and re-watched the first two fights for the umpteenth time I am prejudice, but to me these two were made for each other.  Marquez’s brilliant tactical skills vs. Pacquiao’s amazing power and athleticism should make for a great fight every time.  I can’t decide if I want to see a definitive winner by knockout or another controversial decision.  The KO would give a satisfying ending to the trilogy, but another close decision would add to the boxing lore and barbershop argument that could go on for ages.