I keep hearing these rumors that Manny Pacquiao is going to be Floyd Mayweather’s next opponent. As a boxing writer, the thought of that fight fills me with a dread roughly akin to the first-line troops on the transport ships en route to the 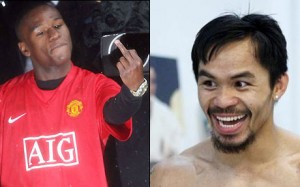 beaches of Normandy. Those guys were mainly thinking whether they’d get torn to shreds by the machine guns or blown to bits by the artillery.

See, it bugs me when I write something and the only response it gets is a bunch of mouth-breathers who flunked out of special ed suggesting that I’m obviously having hot gay sex with whoever the rival is of whatever it is they’ve cultishly sworn to defend. Could be Pacquiao fans saying I’m taking it up the ass unlubed and bareback from Gayweather, could be Floyd fans saying I’m getting the hot beef injection from a roided-up Pacquiao. Hell, I was even accused of hating the sport of boxing for saying something less-than-flattering about Miguel Cotto, and I don’t even think his own mother cares what people say about him anymore. It’s great that people are reading my stuff, but if I wanted to write articles for unpleasable people with limited literacy, I used to write about video games. I’d go back and do that and say something unfavorable about Call of Duty and wait for the teenagers to show up.

So let’s get some things straight right now. One, if Pacquiao and Mayweather were to fight, I’d be rooting for Pacquiao to press the action and get Floyd to open up and stop trying to time him and counter—I’d hope the mutual animosity between the two men would lead to an absolute war in which the fight transcended the sport and turned into two men standing in a boxing ring trying to murder each other (to steal a line from Bill Simmons) with the berserker’s rage. Y’know, like Ali-Frazier III or the ninth round of Ward-Gatti I or any Mike Tyson fight from the 1980s when I’m not entirely sure Tyson wasn’t trying to murder whoever was brave or foolish enough to stand in front of him. I would honestly not give a flying rat’s ass who won—if Pacquiao-Mayweather ended in a draw, thereby causing the entire Internet to implode into a black hole under the weight of fanboy angst, that would be my favorite outcome because the ensuing shitstorm would be quite possibly more fun to watch than the actual fight. I’m a boxing fan, not a Pacquiao fanboy or gay for Mayweather or any of the other unflattering things said of me as an occupational hazard of doing my job. And let’s face it—I must be doing something right if I pissed off that many people.

Two, I’d be really, really grateful to the writing gods if I got a chance to write The Only Preview You Need for Pacquiao-Mayweather. Because that stuff gets eyeballs in front of it, which means pageviews, which means ad revenue, which means I don’t have to eat ramen noodles and cat food. Even if the comments were a hundred repeats of the aforementioned questionings of my sexuality and suggestions that I was dumber than Paris Hilton and should be summarily fired and never allowed to write again, guess what—you showed up. I’ve got your ass like a spider and you can’t turn away. One negative commenter is a jerk—a hundred is a statistic, and a lucrative statistic at that.

And three, and this is why despite the foregoing I hope this fight never happens, is that boxing fans would officially forfeit the right to claim that boxing is better than MMA. Why? Because one of the knocks on MMA is that its fans are nothing but a bunch of frat-boy douchebags who have gay sex while knocking back Pabst Blue Ribbon and wearing Ed Hardy shirts and showing off their tribal tattoos (let’s see if the MMA forum goons show up now to make death threats—see item 2.) But can you imagine the comments sections on this site and ESPN.com and every sports site (boxing or otherwise) all over the Internet if Pacquiao and Mayweather were actually to throw down? There would be no denying it, and the permanent impression would be “holy shit, these people are complete morons.” And if the fight itself wasn’t an instant classic? If Mayweather’s defensive style won out and Pacquiao got frustrated when he got caught coming in and fought on the outside to keep from eating a left hook and ending up on his ass? Styles make fights, and it’s just as likely that the fight would turn into a typical Mayweather chess match that is boxing artistry but casual fan Kryptonite as it would turn into a brawl that favored Manny’s style. If Pacquiao-Mayweather were a low-action, defensive, technical boxing match, the sport might never recover from the damage done. It would be the end of the casual fight fan. It’s better for boxing to talk about that fight than for the fight to happen because we can all dream about our perfect outcome.

Go back and read that last paragraph again, Pacquiao fans. See a pattern developing in my commentary here? I find Floyd Mayweather excruciating to watch when his opponent isn’t playing to his strengths. The reason I liked the Mayweather-Ortiz matchup is because I guessed correctly that Victor Ortiz would be dumb enough to fight Mayweather’s fight. When that happened, he got knocked out in spectacular fashion (admittedly by an anticlimactic finish since Ortiz never learned to “protect yourself at all times”, but it was still a hell of a shot).

Manny Pacquiao, at least when he’s not staying off the gas pedal like he did in the wretched fight against Shane Mosley, actually comes forward once in awhile. If you put Pacquiao in against Victor Ortiz or any brawler from 140 to 154 (Amir Khan, Marcos Maidana, and James Kirkland, I’m looking at all three of you), it might still be a mismatch but it would be a fun mismatch. The fight lead up would be all about “does so-and-so have the power to stop Manny Pacquiao?” and quite a few folks would talk themselves into Manny’s opponent and there’d be real buzz leading up to a fight that, once the opening bell rang, would have the very real potential to be a Fight of the Year-type fight. That’s the fight I want to see, because…get this…I like Manny Pacquiao. Against the right opponent, he’s as much fun to watch as anyone who has ever laced up the gloves. That’s what kills me—Bob Arum won’t let Manny fight anyone who might put a scratch on him, and it keeps me and other fight fans from seeing a guy who should be talked about among the all-time greats make an actual bona fide case for that very claim.

So let’s see…have I got enough inflammatory terms in here that 50,000 people will show up, not read the article, then quote the piece they saw on whatever fanboy forum sent them this link in the comments while calling me gay or retarded? Good. My work here is done. See you next week when I can actually write articles for boxing fans again.

Fox Doucette covers Friday Night Fights for The Boxing Tribune. His weekly column, The Southpaw, appears on Thursdays. He’s really, really glad Ali-Frazier happened before there was such a thing as the Internet. Fan mail, hate mail, and death threats from Pacland can be sent to beatcap@gmail.com.