There are three professions where being completely, 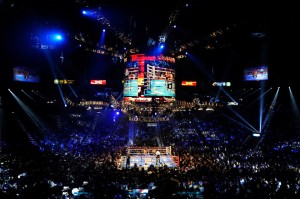 indisputably wrong is a normal course of doing business: weatherman, political commentator, and sportswriter. Unlike the former two professions, where you can ruin someone’s picnic or bring down the entire foundations of democracy if your predictions fail miserably, a sportswriter being dead wrong can be the greatest blessing that the gods can bestow upon mankind. At least that’s what I tell myself after I was completely, utterly, gloriously wrong in my assessment of the quality of the Pacquiao-Marquez thriller.

Now mind you, I called the undercard so well that it was (to steal a line from Australian football commentator Dennis Cometti) centimetre perfect. I said Cruz-Burgos would be an entertaining, competitive scrap; it was that in spades, with Burgos adding a hell of a scalp to his resumé in winning a majority decision over Luis Cruz, who will himself be back to fight another day after taking his first pro loss. I said Breidis Prescott was an overrated fighter who faded in the late rounds in his fights; he got stopped in ten rounds by Mike Alvarado after shooting out all the bullets in the early going. I said Bradley-Casamayor would be embarrassing; the only mistake I may have made would be using a word that was too kind. But getting three predictions out of four right isn’t much comfort when the one missed was the main event.

Anyone who watched the entire card got a treat that should remind us all why we love boxing (as if Angulo-Kirkland hadn’t done so last week.) Those who watched the main event saw Manny Pacquiao look vulnerable and get booed loudly and lustily at the announcement of the decision (your friendly neighborhood commentator had it 115-113 Marquez, but this was far from a robbery—at least two rounds could be argued for Pacquiao, especially if you subscribe to the “you have to beat the champ decisively or you didn’t beat him” school of boxing judging). Pacquiao, for the first time in years, came out of a fight looking like a guy who has something to prove. Which in turn means that we just got a whole lot closer to seeing Pacquiao-Mayweather. Manny Pacquiao now needs Floyd in order to prove that he can legitimately beat a strong counter-puncher (his three fights against Marquez, all of them close and all of them arguably wins for the Mexican, raise a doubt in the discussion of Pac among the all-time greats.)

Meanwhile, boxing even won the day against MMA, as the UFC on Fox event was lackluster at best. To quote Bill Simmons: “UFC loses its network virginity to Fox and it’s over in under 90 seconds. Just like real life!” When a boxing match is over in under two minutes, it’s Ishida-Kirkland or Tyson-Spinks, a wham-bam thank-you-ma’am that delivers maximum satisfaction in minimum time. When an MMA match is over in two minutes, Dana White’s smoking a cigarette and his disappointed lover is reaching for her battery-operated boyfriend and wondering what the hell just happened.

Boxing fans believe that boxing at its worst is better than MMA at its best, but tonight nobody was arguing that the best of MMA or the worst of boxing was on display; quite the opposite. When you compare three great fights (Cruz-Burgos, Alvarado-Prescott, and the main event) and an excuse to make more nachos (Bradley-Casamayor) against a 90-second turn-off-the-casuals UFC disaster, boxing won the day big time.

A common refrain among mainstream and independent boxing media alike is that the sky is falling. We’re like pre-2004 (or post-2011) Red Sox fans, always convinced that the worst is about to happen and that one false move or bad fight card will be the death of our sport. If that were the case, “Pacquiao” and “Marquez” wouldn’t be trending topics on Twitter, ESPN.com wouldn’t have put the live chat of the fight coverage on its front page, Dan Rafael would be making minimum wage to work at McDonald’s while he kept a no-money blog in his spare time, and Max Kellerman would be holding up a “Will Work for Food” sign after the Hopkins-Dawson fight.

We get to spend the next six months having serious debates and fanboy arguments about Pacquiao-Mayweather. We get to spend the next news cycle listening to SportsCenter have a real discussion about Pacquiao-Marquez. Bob Arum gets to count his money and actually be able to look himself in the mirror and say that Top Rank earned the bucks this time. Floyd Mayweather gets to thump his chest and trash talk and give sound bites and great quotes. And a certain boxing writer gets to sit here with egg on his face and think it’s the most delicious omelette he’s ever eaten. Sometimes I love being wrong.

Fox Doucette covers Friday Night Fights for The Boxing Tribune. His weekly column, The Southpaw, appears on Thursdays. He’s not saying boxing is better than sex, but he’s not denying it, either. Fan mail, hate mail, and “I told you so” from Pacland can be sent to beatcap@gmail.com.