If you follow my work, you know that when I am not pumping out traffic garnering articles about the big fights, i.e. 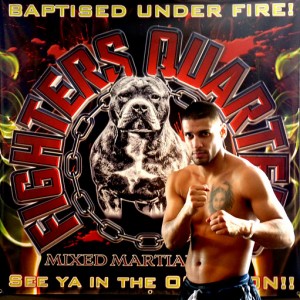 Pacquiao vs. Marquez, one of my favorite writing activities is covering the up and comers and getting into the boxing gym to get a look at the fighters of tomorrow.  So with that in mind, and a little bit of free time in between pumping out trilogy articles last week, I hit up two gyms for visits and interviews (the second visit article to come later in week).

Last Tuesday I hit up Fighter’s Quarters run by Esli Gonzalez in Allentown PA for what is becoming a tradition when Ronald Cruz fights.  The young hard-hitting Puerto Rican welterweight was in camp preparing for his co-headlining fight vs. Anges Adjaho this Saturday at Bally’s Casino in Atlantic City.  The card is headlined by USBA Cruiserweight champ Garrett Wilson taking on Chuck Mussachio.  Cruz takes on the rugged battle-tested Adjaho in the eight round co-feature.

Cruz goes about his rigorous training in a mechanical fashion with little talking and little emotion.  Rounds with the mitts and bags often are not timed but just go for five to ten minutes with no stopping.  The hard work has developed Cruz into an effective pressure fighter with incredible stamina.  His style has built a good following of fans that show their support attending his fights in numbers.  Cruz does not disappoint the fans in the ring as he looks to break his opponents down with heavy handed body shots in search of the knockout.

And scoring knockouts has become a regular occurrence with his trademark body attack.  The undefeated fighter has won all fourteen times he has stepped into the ring with eleven by way of knockout against increasingly better opposition.  He has stopped his last seven opponents including skilled boxer Jeremy Bryan (who was favored to defeat Cruz) and rugged veterans Manuel Guzman, Doel Carrasquillo, and Christopher Fernandez.– All  broken down by a concentrated attack to the body that gets better with each fight. 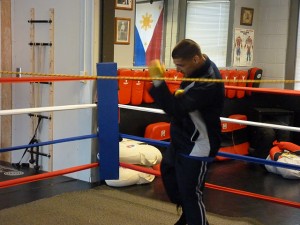 His improvement is the result of continued teaching from trainer Lemuel “Indio” Rodriguez.  Rodriguez has set out with each camp to make improvements to the physically talented Cruz who had a short amateur career.  His footwork, which was plodding, has become faster and more fluid.  He no longer marches forward stalking his opponents straight up but comes after his foes with slick head movement and a heavy jab.  In this camp they have worked on speed and his combinations are firing with more precision as well.

Prior to last camp, Esli Gonzalez was added to the team to further Cruz’s physical conditioning.  The intense MMA, strength, and speed conditioning in combination with Cruz’s intense work ethic and stamina have made him that more dangerous inside the ropes.

On Saturday, Cruz gets his biggest challenge by far as a pro.  He takes on experienced pro Anges Adjaho 25-6 (14 KO) who has only been stopped once, by Antonio Demarco, and went the distance with Shawn Porter,  Joel Julio, Brad Solomon, and Miguel Acosta.  Cruz and his team wanted Adjaho in the last fight, but had to accept Fernandez as a late replacement when Adjaho injured his shoulder.  The team believes they can make a statement and announce themselves to the welterweight division by doing what other prospects have failed to do, hurting and possibly stopping Adjaho.

“Looking forward to making a statement with him.  I know people must know him around the world already for fighting Joel Julio, Shawn Porter, and Antonio Demarco.  He was doing pretty well with Demarco and Shawn Porter or Joel Julio weren’t able to stun him, hurt him at all.  So I’m looking forward to making a point and letting it be known that I’m a strong fighter that is able to hurt Anges Adjaho.

Cruz got top sparring in the previous few weeks going rounds with Philly’s most well-known welterweight prospect, Mike Jones 25-0 (19 KO), who takes on Sebastian Lujan on the Cotto-Margarito undercard on December 3.  The pair were a good fit in that Cruz is similar to Lujan, being rugged and shorter than Jones.  Adjaho is taller and rangy like Jones although not nearly as tall or skilled as Jones.  Each man provided a good test for the other to prepare for their upcoming fights.

Reports indicated that Cruz did well and held his own against Jones who is considered one of the top contenders at 147 and will earn himself a shot at the vacated IBF belt against Randall Bailey if he defeats Lujan.  Cruz, himself ,was pleased with the sparring and lessons learned from competing against a top contender.

“Great man, me and Mike we work really hard when we spar.  We’re both hungry fighters trying to get the best out of the work.  That ends up being world class work right there.  Mike Jones is a tremendous athlete and myself, I’m trying get better, trying to get up there to the rankings.  It ends up being one of the best sparring I’ve ever had.”

While Cruz faces his toughest test in the ring this Saturday, he has faced his toughest battles in his personal life.  I showed up late for my visit and Cruz was out doing roadwork, so I sat and talked with trainer Lemuel Rodriguez and assistant Anthony “Mostro” Colon.  Rodriguez and Colon talked about how happy they are with Cruz’s development in the ring but had just as much pride talking about his life outside the ring.

Cruz is polite and humble, but quiet, so I had not yet learned much about his family life.  While my lateness cost me some 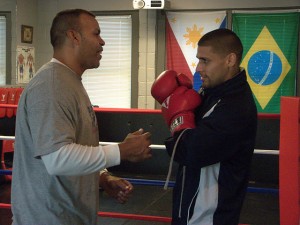 photo opportunities during roadwork, it provided the chance to sit and chat with his team where I learned about the young and humble fighter.   I was informed by Rodriguez and Colon that Cruz is married, has one child with his wife, and is a partner in raising the three children his wife brought to their marriage. Cruz has proudly taken on the stepfather role with his wife’s three children and has been a father figure during trying times.  His wife’s one son and daughter have faced medical issues that can break apart a family, but they remain a tight unit standing by each other.

His stepdaughter developed a benign tumor above her ear that required multiple surgeries to remove.  His stepson’s illness had doctors suggesting that he would never be able to walk.  Colon told me that Cruz looked at the doctor stating that the boy will run.  Colon flashed a proud smile as he told this writer that now Cruz’s stepson went even further, as he can often be found shadowboxing imitating his father’s movements.

With tough times comes inspiration.  When Cruz returned, he shared his feelings on his family and the motivation they provide.

“Like any other guy, everybody has their struggles.  They got to work, train hard, or do whatever they got to do survive.  I’m a humble guy from a humble family and I love my family.  I love providing for them and having the best for them.”

“Seeing her (stepdaughter) go through those struggles like that, seeing her get multiple surgeries and still live life happily like it’s nothing.  Makes me feel stronger mentally.  A little innocent child can go through this training for me must be nothing.” 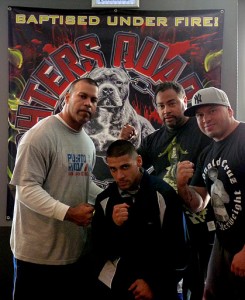 Only fourteen fights in Cruz has headlined in his hometown of Bethlehem and knocked out tough veterans most prospects wait until at least twenty fights to go after.  Now he faces a skilled boxer who was once considered a contender and now, at the least is very capable of surviving and being competitive with big punching young guns.  Cruz can certainly make a statement by dominating or stopping Adjaho to announce his presence in the welterweight picture.  The fight will be a good measuring stick on where Cruz is at this point in his development.

“Get ready for a good exciting fight once again.  I like to provide people with an emotional fight.  I feel like boxing needs more warriors.  I’m here to show that I’m a warrior that is willing to give it all in the ring.”