Imagine waking up this morning as Mexican boxing superstar Juan Manuel Marquez.  Just hours before you 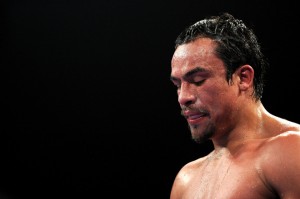 turned in maybe the best performance of your career.  As much as a nine to one underdog, you completely controlled one of the top two pound for pound fighters in the world. You fought your fight, keeping the pace steady and making proper tactical adjustments.  You used the great Manny Pacquiao’s famous aggression against him, much as you did for the majority of your first two bouts with the Pac man, but this time was different.  This time you didn’t let him get to you.  This time you were never hurt, never uncomfortable.  Hell, you were barely breathing hard.  Somehow though, you remember leaving the ring for a third time without having your hand raised in victory.  Worse yet, as you come to you’re senses, you are faced with the reality that it wasn’t all a bad dream.

In fairness to the judges of last night’s super-fight, whom most observers believed failed in their duty to ensure the better man won, they were judging rounds 1 through 12 of Marquez-Pacquiao III, not rounds 25 through 36 of their series.  Whatever perceived injustices occurred in the scoring of the first two fights was not their fault.  However, that is little consolation to Marquez and his legion of fans who can make a pretty good case that he has now out-boxed Pacquiao three times, each time doing a better job than the last, and each time getting a worse result.

As far as the fight itself Pacquiao (54-3-2, 38 KOs) won presumably on the strength of his aggression.  He threw and landed more punches, which often is enough to win over the judges.  Marquez (53-6-1, 39 KOs) however was technically far superior.  His punches were cleaner and more damaging, snapping Pacquiao’s head back consistently and causing the Filipino to do something we have rarely seen in recent years, take steps backwards.

Without going back and analyzing every single round, take a second and think about the four criteria for judging a boxing match: clean punching, effective aggressiveness, ring generalship, and defense.  The first is considered the most important, and there is little doubt that Marquez landed crisper, harder punches.  While Pacquiao was more aggressive his aggression was very rarely effective, in fact it was the opposite, as the more aggressive he was the more Marquez was countering him.  Ring generalship was another wide advantage for Marquez, the fight was almost completely battled out at his preferred methodical pace.  He proved once again that the way to deal with Pacquiao’s whirlwind style is to make him think twice about engaging.  For all his amazing athletic talents and strengths in the ring, Manny is simply not a smart fighter.  If he is forced to fight at a slow pace against strategically sound opponent, he is always going to struggle.  Defensively, you can also make a pretty good argument for Marquez, as even when Manny was landing, his punches were usually glancing or bouncing off Marquez’s gloves before making contact.

There, I’ve said my piece about my confusion with regard to the judges, but the bottom line is that decision is theirs to make.  They decided to score on aggression and punches landed, and they are allowed to do that.  Where does this leave us now?  For Marquez, retirement might not be just a post fight threat out of frustration.  He has become our generation’s Marvin Hagler; a great fighter, a class act, and a guy that can simply not get the benefit of the doubt in his biggest fights.  Hagler famously states he never put on a pair of gloves again after he felt he was robbed in his fight with Ray Leonard, and while it would be a shame, it wouldn’t be shocking if Marquez did the same.  Consider that in six career losses, Marquez has only been convincingly beaten once.  Other than a virtual shut out at the hands of Floyd Mayweather, he has four controversial decisions against him and one disqualification.

Speaking of Mayweather (42-0-0, 26 KOs) leads into what is next for Pacquiao, and it isn’t a pretty picture for Pac man.  While some desperate claims of “styles make fights” rang out from people trying to pretend that Marquez’s beating at the hands of Mayweather doesn’t imply that Pacquiao would get the same, that is nothing more than a great example of how that cliche is overused.  Styles make fights doesn’t mean anything when in Marquez and Mayweather you are talking about two fighters with essentially the same style.  Both are classic boxers, intelligent, thinking fighters, and prefer to counter-punch.  Imagine the Pacquiao we saw last night in with a guy that is bigger, stronger, faster, smarter, and more skilled.  The question becomes not whether the Manny could win, or even be competitive, but rather could he last the distance or even win a round.

Marquez said as much after the fight about a potential match-up between his two common opponents, but Mayweather using his style in a superior fashion to beat Pacquiao is unlikely to make him feel any better.  What Marquez chooses to do next remains to be seen, but in his mind, the damage of three bad decisions has already been done.