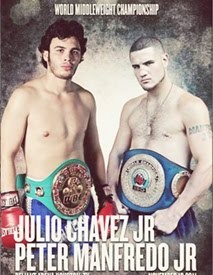 Chavez, Jr. is currently ranked the 6th best middleweight in the world by The Boxing Tribune and holds the division’s WBC title belt.  Despite having a decent following of hardcore Mexican fight fans who hope he is able to reach the legendary status of his father, Chavez, Jr. has continued to lack popularity with rest of the boxing community at large.  Struggling against the unheralded but undefeated Sebastian Zbik for a majority decision win in his last fight didn’t help, but a win over former title challenge Peter Manfredo, Jr. could lead to bigger and better things.

Manfredo, Jr. is best known for his role on NBC’s television series “The Contender” which followed a group of professional boxers as they battled it out in a boxing tournament where the winner took home a cash prize.  Manfredo, Jr. made it to the finals of the show before ultimately losing to tournament champion Sergio Mora.  Like other fighters from the show, Manfredo, Jr. used newfound notoriety to land some big fights — most notably versus Joe Calzaghe in 2007 which he lost by TKO.

Chavez, Jr. vs. Manfredo, Jr. will take place at Reliant Arena in Houston, Texas and air on HBO’s Boxing After Dark at 10:30pm ET.  The Boxing Tribune will tweet live from press row, so be sure to follow @Boxing_Tribune for round-by-round scoring.