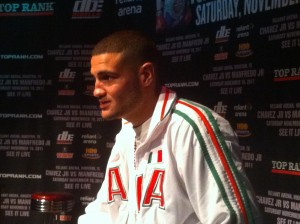 eliminated by then-unheralded Alfonso Gomez in the show’s opening bout.

As luck would have it, Manfredo would get an opportunity to get back into the competition again when one of the show’s other contestants was medically disqualified.  Making most of the chance, Manfredo put together a three fight win steak, including a revenge win over Gomez, to put himself into the show’s final bout.

Again the favorite, Manfredo was upset by Sergio Mora in the championship finale.  Five months later, Manfredo again lost to Mora in the rematch, this time by controversial split decision.  So while Manfredo had proven he truly was a contender in the sport he loved, he didn’t quite show he could be anything more than that..

Back in Providence, Rhode Island, Manfredo moved up to what he then considered to be his natural fighting weight of 168 lbs.  “The Pride of Providence” quickly showed why he believed it.  He quickly dispatched Scott Pemberton and Joseph Spina by 3rd round TKOs to earn a shot against the division’s champion and future hall-of-famer Joe Calzaghe.

Of course, as champion, Calzaghe wasn’t going to come to Rhode Island for the fight.

In 2007, Manfredo packed his bags and headed across the pond in what would be his biggest stage to date.  In front of a raucous British crowd, Peter Manfredo, Jr. stood across the ring from his rival.  Announced as the contender for the contest, perhaps for the last time, Manfredo readied himself.

But it was not meant to be.  Calzaghe came out of the gate firing on all cylinders, and a quick barrage of punches in the 3rd led referee Terry O’Connor to halt the action despite the fact that Manfredo never appeared truly hurt.

This time, a quick win in Rhode Island over Ted Mueller, and a decision win over David Banks set the stage for another chance for Manfredo.  This time, fighting on the undercard of the Mayweather-Hatton PPV on HBO, Manfredo met former title challenge Jeff Lacy.  The winner of the fight could possibly put himself back in position for another title shot, and Manfredo believed he could be that winner.  In the end, though, Lacy proved to be too strong as he outslugged Manfredo over 10 rounds.

So in 2008, Peter Manfredo, Jr. undauntedly traveled back to Rhode Island.  This time, though, the friendly confines of his home state were not as kind as it had been in the past. After winning three fights in a row on his Rhode Island turf, he was destroyed by Sakio Bika, “The Contender: Season 3” champ, in just 3 rounds.

So what was Peter Manfredo, Jr. to do?  He couldn’t really go home this time. He was already there.

Manfredo’s next fight took place in (of all places)Canada. “The Pride of Providence” found himself duking it out with Canadian fighter Walid Smichet in Montreal.  Manfredo won the fight by KO.  Since then, he has won every fight to total an impressive six fight win streak including exciting wins over Angel Hernandez and Daniel Edouard.

A six fight win streak can do a lot for a fighter’s career.  In this case, it has earned Manfredo a chance to fight the undefeated Julio Cesar Chavez, Jr. for the WBC middleweight title belt.  For Manfredo, this fight is as huge as any he’s fought.