This Saturday Saul “Canelo” Alvarez, one of the hottest prospects in boxing, will defend his WBC light 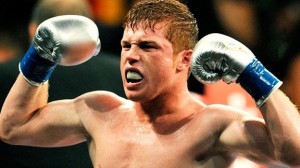 middleweight title on HBO against Kermit Cintron.  The belt itself is fairly inconsequential (notice the word “prospect” rather than “champion”) having been awarded the young fighter more for his astounding ability to sell tickets and draw television ratings than his in ring performance.  One thing does need to be made clear, however:  Beyond his popularity the kid is a serious fighter.

After a shaky (and nearly disastrous) first round in his coming out party to the American public against Jose Miguel “Not THAT Miguel” Cotto, Alvarez (38-0-1, 28 KOs) has dominated every opponent.  In fact, during the five ensuing fights since that 2010 pay-per-view under card bout, Alvarez has barely lost a round.

Things got a little strange for Canelo in his next bout, again on a Floyd Mayweather under card, in September.  Up against over matched Alfonso Gomez, Alvarez looked flat-out bored.  He stood around practicing different stances and techniques, swung wildly as if looking only for a spectacular knocking, and honestly seemed like he would have rather been somewhere else.

If Alvarez is getting bored with being fed no hope opponents, we have to wonder if Cintron (33-4-1, 28 KOs) is the answer.  Cintron was at a one time a promising young fighter himself, but after an up and down career that has seemingly included some serious mental lapses, any respect he ever commanded among the hardcore boxing fan base has evaporated.  Because of this, one can not help but wonder if this is a lose-lose situation for Alvarez.  If he dominates, he was expected to.  If he struggles for even a moment (a possibility considering that when motivated, Cintron has the physical tools to give a top fighter some trouble) the effort will be considered disappointing.

Obviously, nobody on Canelo’s team wants to see him over matched at the very young age of 21, and that is perfectly understandable.  We live in a “right now” culture, and fans demanding that he take on world beaters at this stage in his career are unreasonable.  However, if he continues to take sideways steps fighting decent but limited opponents, his quest for credibility as an elite fighter will remain stagnant.  Here’s to hoping that after Cintron, Canelo takes a solid step forward against a more interesting opponent.