American born fighter Russell, Jr. is a 23-year-old southpaw with a decorated amateur career.  He began 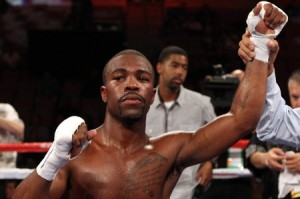 Ruiz is a veteran Mexican fighter and has won three of his last four fights, all by KO.  Ruiz’s most recent notable losses were against Steve Molitor in 2009 and Rico Ramos in 2010.

Russell, Jr. was originally slated to face Dat Nguyen (17-2, 6KOs) but Nguyen pulled out of the fight early in November due to a knee injury.

The fight will take place on the undercard of the main event featuring Adrien Broner vs. Vicente Martin Rodriguez.  HBO’s Boxing After Dark will air this main event as well as Saul Alvarez vs. Kermit Cintron in a junior middleweight title bout.