HBO’s Boxing After Dark featured two young, undefeated stars on their way up the boxing ranks in another one of HBO’s 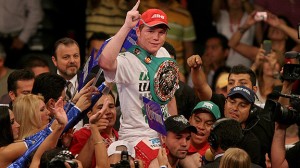 Cintron tried to box early in the fight by using his height and reach advantage against the stockier but more powerful Alvarez, but was unable to land anything hard enough to get Canelo’s attention.  As the fight wore on, it became increasingly clear that Alvarez had the heavier hands and was more willing to engage enough to do damage.

Alvarez had Cintron down in the fourth round and again at the end of the round laying up against the ropes with blood streaming down his nose, seemingly beaten.  The fight continued in the fifth with Cintron stumbling around the ring but still throwing shots at the oncoming Alvarez.

In the end, Alvarez was just too strong for the challenger and the bout was mercifully halted at 2:53 of round five.  In his post-fight interview, Alvarez took even the HBO commentators by surprise by saying he wanted his next fight in May against Floyd Mayweather.

While Alvarez is an excellent prospect, he has fought no one near the level of fighter of Mayweather.  More likely, a showdown with WBC middleweight titlist and fellow Mexican superstar Julio Cesar Chavez, Jr. would be the biggest draw of all legitimate potential bouts for Alvarez.

Broner established his physical superiority early in the fight by using blazingly fast jabs and sharp right hands to keep his opponent at bay. The rugged Rodriguez kept coming forward and was able to press the action at times though he was never able to do enough to even come close to winning a round of the short-lived, three round action.

Broner hurt Rodriguez in the first but wasn’t able to finish the job. The action picked up in the second with both fighters able to land shots with Broner able to get the best of it. The third round saw Broner do his best Floyd Mayweather impersonation. Leaning in the corner, covered in the popular defensive style known as the Philly Shell, Broner did his best to lean and parry the challenger’s onslaught of punches.

He wasn’t able to pull off any sort of real defensive wizardry, but he was able to land hard enough counter punches that ultimately led to the final pulverizing left hook which put Rodriguez down for the count at 1:43 of round three.