Story and Photo by Gary Purfield

In the PPV opener to the much-anticipated Cotto-Margarito rematch, welterweight contender Mike Jones from Philadelphia will get the opportunity to move one step closer to the goal of winning a major title belt. 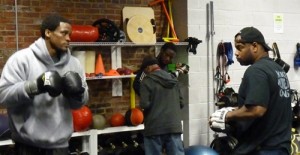 Jones 25-0 (19 KO) will open the PPV broadcast taking on the rough and rugged Sebastian Lujan 38-5-2 (24 KO) of Argentina.  The winner gets the automatic shot at Randall Bailey for the IBF belt that was recently vacated by Andre Berto.

Jones has had a steady progression since turning pro in 2005, being guided by hall of fame promoter Russell Peltz.  Jones was trained by the late Joe Frazier as an amateur and since turning pro has been with Vaughn Jackson.  Jones started his career with a string of twelve straight knockouts.  Eleven of the twelve KO’s were inside of three rounds including five first round stoppages, developing him a reputation as a feared puncher.

In his fifteenth fight Jones won the NABA belt stopping Juliano Ramos (15-1 at the time) in the sixth round.  Jones continued gaining learning experience, picking up regional belts, and developing as a boxer defeating increasingly better competition.  He notched wins over Lenin Arroyo, Henry Brussels, and Irving Garcia.  The fifth round KO of Garcia was the featured bout on ShoBox that evening.

Then Jones got his biggest opportunity on November 13, 2010 on the Pacquiao-Margarito undercard at Cowboys Stadium in Texas.  Jones entered at 22-0 taking on the veteran tough guy, Jesus Soto-Karass in the final bout before the main event.  Early in round two Jones landed a huge right hand that staggered Soto Karass.  Jones pounced on his opponent looking to score the highlight reel KO on the big stage, unloading a flurry of punches for nearly two minutes, but to his dismay, the hard-headed Soto-Karass was not going away easily.  By the end of the round Jones was spent, Soto-Karass was still standing, and the fight was taking a drastic turn.

Jones would manage to survive for several rounds and to his credit toughed out the second half of the fight, winning the majority of the rounds down the stretch to walk out with a majority decision.  Then, in an immediate rematch, Jones showed his growth as a fighter by dominating Soto-Karass to a bloody beat down, taking home a twelve round unanimous decision that opened HBO’s Boxing after Dark.

Jones scored a second round KO of overmatched Raul Munoz in a stay busy/come home fight at the Arena in Philadelphia in June of this year.  Now he has the biggest stage, the biggest fight, and the biggest opportunity of his boxing career in front of him, taking on Lujan in Madison Square Garden on a PPV card.  A win catapults him directly to a title shot and gains him more exposure on the national stage towards future big money bouts.

I caught up with Jones and trainer Vaughn Jackson for their last day of training at Joe Hand Gym before leaving for New York that night. Jones is on the quiet side and kept it simple when asked about fighting in the Garden and the opportunity to earn a title shot.

“I’m excited.  A lot of great fighters fought there before.  That’s a big fight venue and it’s going to be packed.  It’s Cotto-Margarito II, very excited.

“I’m very optimistic about my future.   I feel the sky’s the limit.  I feel with the hard work and effort I put forth each and every day I just can’t wait to get in there and show the people I’m one of the best in the world.”

His opponent is hardly a simple stepping stone to a title shot.  Lujan is on a twelve fight win streak.  During that time he has knockouts of Walter Matthysse and Mark Melligen, along with a decision over Jose Luis Castillo.  Lujan is known for being a tough come forward fighter.  What he lacks in great boxing technique he makes up for in rugged toughness and strength.  Lujan is also known for having a solid chin but has been stopped twice, once by Antonio Margarito and once by Marco Avendano.  Both losses were in 2005 and both Margarito and Avendano stopped Lujan with body shots.

The 6ft 1 Jones will have a significant height advantage over Lujan, who stands 5ft 6, and plans to use his long frame and boxing skills to walk away the winner.  Lujan will likely look to rush in on Jones to make this a close quartered brawl where he can negate Jones’s reach and use his strength.  Jones is well aware of what he has to do and what he is facing in the Argentine brawler.

“I need to keep it a boxing match but I also need to establish respect in there and stand my ground at the same time.  Keep him turning, stand my ground, and be agile with my feet.”

“That’s his strength (rushing forward), that’s what he does best, come at people.  Throw a bunch of punches.  I expect him to do what he knows how to do best.”

I asked Jones if he would be content using his height and boxing ability to win the fight or if he felt pressure to make things exciting on the big stage.  Essentially with an opponent like Lujan would it be best to win today and look good tomorrow which would set up his title shot.

While Jones is conservative with his answers, trainer Vaughn Jackson admits he is the one that will provide the exciting quotes.  Jackson is very confident he has the special fighter in the match who will walk away with the title shot on the table Saturday night.

“Well, you know I think Lujan is an exciting fighter to watch.  He’s a ring bully and Mike Jones, we from Philadelphia and we used to all kind of adversity and nothing Lujan can bring that we never saw before.  I think Mike Jones is going to be victorious.  Lujan will slow up you know in the later rounds because we gonna go to his body.

One thing Jones is grateful for is the experience he gained fighting Soto-Karass on the Pacquiao-Margarito card and the lesson he learned that night.  He is confident he will benefit from his past experience and won’t make the same mistake twice.

“Oh yeah, most definitely.  Especially the first one, you know if I catch him with a good shot keep my composure and stick to the game plan.”

Jones expects crowd support from his hometown that is two hours from the Garden or a short train ride.  Philly fans have supported Jones in large numbers, attending his fights in the local region and Jones expects it to be no different fighting in New York.

Jackson took it another notch talking about the excitement Mike will bring to NYC referencing Mike’s new look and a former Philly fighter who took home the win in the fight of the century at Madison Square Garden.

Jones has been a highly touted prospect, then contender for several years now.  He has patiently developed as a fighter to prepare himself for this point in his career.  Now he will have the opportunity to prove himself in front of a raucous audience in the Mecca of boxing, Madison Square Garden.  If he comes out on top bigger things lie ahead with a title opportunity and even bigger opportunities on the horizon such as cracks at top welterweights like Pacquiao, Mayweather, Ortiz, and Berto.