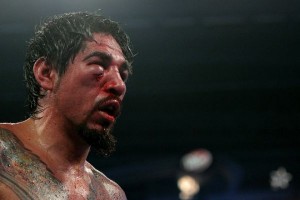 I don’t know about sexual gratification (that’s a little too weird even for me), but if ever an opportunity existed for deriving pleasure from extreme cruelty, the Cotto-Margarito rematch certainly qualifies. In most walks of life, hoping that an act of revenge is served ice cold, hoping that a man will be beaten within an inch of his life and permanently deprived of his livelihood while his assailant receives accolades and greater glories personally and professionally…well, anyone who advocated such a position would be rightly classified as a barbarian and, well, a sadist.

Then again, I never claimed I wasn’t a barbarian. And since the various grifters, boxing commissioners, hangers-on, and other parasites around the sport haven’t seen fit to properly administer justice upon Antonio Margarito for committing one of the most cardinal sins in the Sweet Science—using loaded hand wraps to do real damage to his opponent and risk inflicting career or possibly life-ending injuries upon those men—it falls to Miguel Cotto to not only seek revenge for the beatdown he suffered at Margarito’s plaster hands but to succeed where justice and bureaucracy failed and ban his foe from the ring in a far more violent fashion.

If indeed Cotto manages to cave in Margarito’s surgically repaired orbital bone and retina, if the cheater finds himself bloodier than Rob Frankel after John Molina got through with him (more on this later), if the fans in attendance aren’t sure whether to cheer wildly or lose their lunch on the Madison Square Garden floor at the sheer gruesome spectacle of a man literally getting his face bashed in, if pictures of the fight circulate out to the greater mainstream media and cause some empty-headed nitwit morning show host (Skip Bayless, I’m looking at you) to chide us all for our love of violence, then all that means is that maybe there is a God and maybe He has some regard for basic decency among His creation.

Then again, this does bring up a very uncomfortable question in the mind of the boxing fan. Namely, why do we watch? This is, after all, a sport where two men beat the hell out of each other until either one of them falls down and cannot get up for at least ten seconds and occasionally permanently or an arbitrary number of rounds have passed and three ostensibly impartial people pass judgment upon which man more effectively attempted to murder the other one with his fists. People pay a lot of money to witness this spectacle in person and are periodically persuaded to augment their cable television bill with a fee assessed for viewing this legalized assault and battery from the comfort of their own living rooms.

When Ray Mancini committed sanctioned manslaughter against Duk Koo Kim in 1982, thousands of people cheered with every strike which drained the life from the Korean and millions more watched on television, many of them delighted that the American fighter was so soundly carrying the day. When David Diaz got beaten bloody by Hank Lundy on Friday Night Fights, your friendly neighborhood commentator said on ESPN’s Facebook page that “Diaz should fight Rob Frankel. No scheduled number of rounds, just stick ’em in the ring and let ’em punch each other until one of ’em bleeds out.” Rather than a chorus of “dude, not funny”, the comment instead garnered a chorus of “LOL” and someone even saying “They’d be bleeding at the weigh-in.” Take a step back from that and you quickly realize that something is wrong with this picture—advocating a man bleeding to death for popular entertainment, even in jest, brings the concept of bloodlust past the point where it would be acceptable entertainment in anything short of the Saw movie franchise.

One need not see blood in order to see the sadistic tendencies of the sport in action. If I say “What’s my name, Uncle Tom?” to you, and if you’ve any reverence at all for boxing history, you know what happens when boxing crosses the line between sporting contest and act of active malice. We speak of fights in the preview stage like “This fight promises to be all-action as these two guys genuinely dislike each other and that hatred should be on display in the ring.” Read that sentence again. Bill Simmons, writing for Grantland.com, said of Ali-Frazier III that “Once upon a time, on a sweltering night in the Philippines, Muhammad Ali and Joe Frazier tried to murder each other. This happened legally, which somehow made it OK.” Considering what Ali and Frazier thought of each other, that pretty well makes my point for me, no?

Now mind you, I am not going to be some hectoring moralist. I for one think that any society that does not have an outlet for its more base urges is no society I would ever want to live in. If two people of sound mind and body want to risk their lives for a paycheck and a chance at the fame that has followed such characters since the gladiators of ancient Rome slaughtered one another for public spectacle, then there should be no impediment to their doing so—indeed, if one has as his calling the desire and the ability to beat other guys into broken shells of their former selves, such calling is ordained by the gods the same as it was in antiquity. The violence is not the problem.

All I am asking, and reminding people in advance of a pay-per-view card that promises no shortage of the aggressive violence we all know and love, is that we are honest with ourselves about our motivations for watching. I want to see Antonio Margarito beaten within an inch of his life. I want to see Pawel Wolak and Delvin Rodriguez put on a display of utter mayhem to match their first effort. I want to see either Sebastian Lujan do to Mike Jones what he did to Mark Jason Melligen…or to see Mike Jones show the world in spectacular fist-to-face fashion that he ought to be spoken of in the same breath as Manny Pacquiao and Floyd Mayweather at welterweight, perhaps even to fight one of those two gentlemen sooner than anyone expects. I want to watch with morbid curiosity as Brandon Rios feasts upon a complete mismatch and unleashes the sort of one-sided demolition of which he is so wonderfully capable. And I am perfectly OK with all of the above.

Does this make me a brute, a barbarian, a terrible human being? Maybe. But if you’re the type of person who thinks that an enjoyment of consensual violence between people being paid well to put on such a show is brutish or barbaric or terrible, then I have just one further question for you.

What in the blue hell are you doing on a boxing site? You want uncivilized, stepping on someone else’s good time is worse than anything, you whiny Helen Lovejoy busybody. Isn’t there a bowl of Cheerios in need of someone like you to piss in it? Shove off—the rest of us have fights to watch.