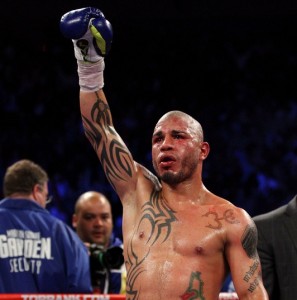 But Cotto had enough mojo, Margarito was light on the plaster, and/or Manny Pacquiao’s eye-busting assist gave the Boricua star enough juice to come away with the win.

Honestly, as much as I’d love to say that Cotto’s win proves that he is the better fighter and greater human being, there were a lot of extenuating circumstances that kinda, sorta diminished the importance and significance of the win.

Who knows what would’ve happened if Margarito had nine more minutes or, for that matter, what the fight would’ve looked like had his right eye been 100% healthy. But you could also say the same thing about their first fight back in 2008– What would that fight have looked like without the cement in the gloves?

In any case, now that Cotto has exercised one of his big, dumb, annoyingly smug demons, it’s time to perform a complete purification. It’s time to ditch Top Rank and Bob Arum.

I’ve been racking my brain, trying to remember a time when such a major fighter has been treated so poorly by his own promotional team.

In these last few years, the disrespect tossed at Cotto has been a lesson for all those “good soldiers” in the sport who tow the company line and keep their mouth shut.

As everyone knows, Margarito was found to be sporting knuckle pads coated with a “plaster-like” substance in his hand wraps prior to his 2009 bout with Shane Mosley. When people put two and two together, many put a big question mark over all of Margarito’s wins, most notably his brutal destruction of Miguel Cotto and the grotesque manner in which he battered Cotto’s face.

Top Rank honcho and alleged member of Team Cotto, Bob Arum, spent most of the “Plaster Gate” scandal defending Margarito and denying the loaded wrap claims…at the expense of the feelings of the possible/probable victim, Miguel Cotto.

Cotto sat back and remained the strong silent type, only occasionally giving voice to the anger he felt inside for the possible cheat and the frustration of having his own promoter defend the fighter who may have, literally, stolen millions from him when his loss ruined the chances of a talked-about showdown with Oscar De La Hoya.

Then, after suffering a beating that may have been caused by an illegal substance and having his promoter turn his back on him, Manny Pacquiao jumped in and claimed the glory that could very well have been his by knocking off Oscar.

After this, Cotto was forced into a nothing fight with Michael Jennings and a tough battle with Joshua Clottey for a fraction of the pay he would’ve received from a De la Hoya bout.

All this lead to an eventual big money showdown with Pacquiao where, despite being the reigning champ, he was forced to give in to every one of Pacquiao’s demands, including an arbitrary 145-pound limit.

While the blame for this weak negotiating falls squarely on the inner circle of Team Cotto, it should be pointed out that the intermediary, Arum, never once lifted a finger to argue on Cotto’s side of the table– despite having just lured Cotto to a two-year extension on his Top Rank contract. As a matter of fact, Arum actively pushed for Cotto to give in to all the demands and allowed for the WBO to back his fighter into a corner and force the catchweight title defense.

How’s that for respectful treatment of a veteran champion?

Cotto’s two-year extension with Top Rank is now all but over and the fighter has some major decisions to make. Already a star and a businessman with his own promotional company, Cotto, according to media reports, may finally be re-considering another run with Arum and crew.

For years now, Arum has treated Cotto as the ultimate fall guy, propping him up, only to have him knocked off in favor of the latest Top Rank flavor of the year. Now, if Cotto re-signs with Top Rank, Arum’s next plan for Cotto is likely to fatten him up to middleweight and deliver him to Julio Cesar Chavez Jr.

In this column, I have pointed out the matchmaking genius of Bob Arum and how he has the uncanny talent of putting his guys up against soft touches who, on paper, don’t appear to be soft touches at all. With Cotto, though, Arum has repeatedly fed him to the lions and has gotten downright testy with the Puerto Rican three-division champ when Cotto would not fall in line.

It’s no wonder guys like De La Hoya and Mayweather opted to be on their own as soon as they reached the top.

Cotto may not have the star power or career upside of De la Hoya or Mayweather at the point they ditched Arum, but he is a legitimate draw and, sure as hell, doesn’t deserve to be treated as Arum’s perpetual whipping boy.

A free agent Cotto will be free to explore mega-fights with guys like Mayweather, Canelo Alvarez, or even Chavez Jr., if he wants. The difference will be that Cotto would finally be able to call the shots and work in his own best interest.
*******************
Speaking of Floyd Mayweather and Bob Arum– There’s no situation that better highlights the mass idiocy and/or shady ethics of the boxing media than when Arum titty-twists the media dullards and shills into buying wave after wave of Mayweather-Pacquiao BS.

The latest silliness involves these recent “negotiations” for a Mayweather-Pacquiao fight that, if you believe everyone on Team Mayweather (including Mayweather, himself), are not happening at all.

Of course, this wouldn’t be the first time that Arum negotiated with an empty chair. Remember last year when Arum issued Mayweather a deadline to sign a contract for the fight, despite later admitting that he never actually spoke to anyone from Team Mayweather about the bout?

I will write more about this recent round of phantom negotiations in next week’s Monday Rant, but the sheer gullibility of a group of adults and alleged journalists is amazing.

Until I dig into this mess a little more next week, just remember that every word about these so-called business dealings comes directly from only one source– Bob Arum.

And the simps who run with this story without putting things in their proper context are the usual suspects who seem destined to be perpetually duped by the same guy with the same story. Others, though, are not so innocently gullible– they’re downright complicit in the scam. More on this in next week’s Monday Rant.

You can email Paul at paulmagno@theboxingtribune.com or catch him on The Boxing Tribune as he takes career-destroying swipes at boxing’s smug, corrupt media swine. Paul is a full member of the Burger King Kids’ Club and an ordained minister in the Universal Life Church.