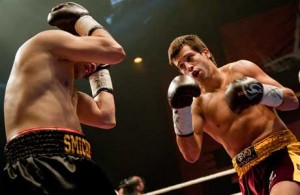 layoff following a humbling knockout loss.  The fight will take place at the Bell Centre in Montreal, Canada.

Formerly an unbeaten prospect, Lemieux suffered a knockout loss to Marco Antonio Rubio who is ranked 5th among middleweights.  Until that loss in April 2011, Lemieux had won all but one of his fights by knockout and was rising fast in the middleweight division.  The loss to Rubio put the brakes on the aggressive scheduling and Lemieux parted ways with the trainer he’d worked with since he was nine.  Coming into this bout, Lemieux is ranked 19th in the world among middleweights.

Alcine, a former junior middleweight titlist, is making only the second appearance of his career as a middleweight.  Alcine is 2-2-1 in his last five fights with both defeats coming by knockout, one of those via Alfredo Angulo who forced a first round TKO.  At 35 years old, and thirteen years Lemieux’s senior, Alcine needs to make a statement in order to put his career back on track.

The title bout will be part of the “Fast and Furious” series and will co-feature Adonis Stevenson vs. Aaron Pryor, Jr. as well as eight other scheduled bouts.