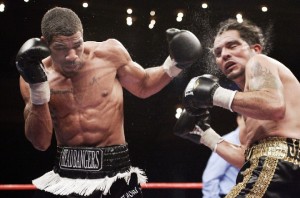 10th in a lightweight matchup at the Walter E. Washington Convention Center in Washington D.C.

Peterson, the younger brother of Lamont Peterson, is coming off a DQ loss to Brandon Rios, a fight that was called due to excessive low blows.  Since that loss in September 2010, Peterson has not been in the ring but hopes to get his fight career back on track this Saturday.

Attah, a southpaw fighter from Nigeria, has lost five of his last seven fights.  His last fight ended in a TKO loss to Roman Martinez who is now 25-1.

This non-televised bout is featured on the undercard for Amir Khan vs. Lamont Peterson which will air on HBO at 9:45pm ET.