Nothing defines a fighter like how he responds to his first loss. Some guys, they step into the ring with a big gaudy record, get promptly deposited on their ass, and next thing you know they’re fighting some construction worker at a fairground in some podunk nowhere and telling anyone who will listen how they used to fight on TV back in the day before losing 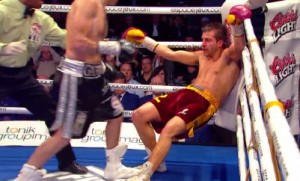 eight straight. Other guys, you knock them out and when you wake up the next morning they’re world champions. Last week we saw a man conquer his demons. This week, we get to see a man face them.

Unless you’ve been living under a rock for the past week, you probably heard how Miguel Cotto finally avenged his first career loss, taking an almost perverse pleasure in repeatedly attacking the surgically repaired eye of Antonio Margarito until the Mexican, left without reply since he no longer had plaster in his wraps to mask his lack of ability against elite competition, found himself forced to sit down after the ninth round when people more sensible than himself decided that his health was more important than his machismo. Cotto had his revenge, and in some sense he succeeded where many a boxing commission failed, ensuring that Antonio Margarito will likely never be a major force as a fighter again.

Not everyone is so lucky as Cotto. When trainer Panama Lewis removed padding from the gloves of Luis Resto in 1983, leading to Billy Collins being beaten up so badly that he never fought again, his blurred vision from a torn iris quite possibly responsible for his death in a car accident the following year, Lewis and Resto were brought up on charges and banned from the sport for life. Until someone explains to me how Antonio Margarito’s sins are any less than what Resto and Lewis inflicted on Billy Collins, I will continue to beat the drum for Margarito’s permanent banishment from boxing and hope that Miguel Cotto’s display of heart, toughness, and perseverance indeed did future boxing commissions’ jobs for them.

This is not to say that Cotto is the first man to face demons in the ring from a knockout loss. Back in 1973 Joe Frazier was savagely demolished by George Foreman, and truth be told Frazier was never the same. He would go on to lose three more fights in his career (two to Muhammad Ali and the third a fifth-round KO at the hands of the grillmaster in their 1976 rematch) while winning only three more against good but not great competition (Joe Bugner, Jerry Ellis, and Jerry Quarry) and a draw in an ill-fated comeback attempt against Floyd Cummings fully five years after the Foreman rematch forced Frazier into retirement. In point of fact, when Howard Cosell yelled “Down goes Frazier!” on national television, although it may not have looked it, Joe Frazier’s career as a champion was over.

Speaking of great heavyweights from the golden age, George Foreman bears mentioning as well; after his loss to Ali in the Rumble in the Jungle, Foreman took a 15-month layoff before coming back against the late Ron Lyle, but it would be twenty years before the WBA belt Foreman lost would finally find itself back around his waist. Lest we forget, with the exception of the Frazier fight, George Foreman’s 1976 comeback was more of a requiem for a once-great champion than a legitimate run at the WBA strap, and when Jimmy Young beat big George in 1977, dropping Foreman in the 12th as an exclamation point on a unanimous decision, Foreman took up preaching over punching for a decade. Consider those two Hall of Fame examples when considering just how impressive Cotto’s win was last week.

It is in this proud tradition that David Lemieux (25-1, 24 KOs), once talked about as an opponent for Lucian Bute in a Montreal middleweight superfight, attempts to put back together the tattered remnants of his Mike Tyson-esque reputation as a monster in the ring. From the moment he made his pro debut at age 18, Lemieux used a combination of schoolyard bully aggression and nuclear weapons-grade power in his fists to thrash a motley array of Montreal fighters, the vast majority of them in the first two rounds of their fights. On Friday Night Fights in June of 2010, Lemieux introduced himself to American audiences by introducing Elvin Ayala’s ass to the canvas thrice in two minutes and forty-four seconds of delightful savagery. Against Hector Camacho Jr., Lemieux again dropped more bombs than the Blitz en route to a first-round knockout, and when the Canadian stepped into the ring with Marco Antonio Rubio on ESPN in April of this year, viewers could have been forgiven for expecting more of the same.

Except nobody told Rubio he was there to get knocked out. Teddy Atlas pointed out at the start of that fight that Rubio’s plan was to survive the first four rounds then, when Lemieux began to grow frustrated at not erasing his opponent, to take the fight to the enemy. You’d have thought Atlas had a crystal ball or a time machine by the time the seventh round rolled around and trainer Russ Anber threw in the towel to spare his 22-year-old charge taking any more punishment at the hands of the experienced Mexican contender. David Lemieux had not just taken his first pro loss; he’d been made to look foolish, just another brawler with a bunch of tomato can victims, a gaudy record, and a rude introduction to reality.

Lemieux has not fought since. Against Joachim Alcine (32-2-1, 19 KOs) this Saturday, with a new trainer (Marc Ramsay) and an opponent in front of him who has folded in the face of fighters (Daniel Santos and Alfredo Angulo) with similar penchants for pressure to Lemieux, this could be a bit of a confidence rebuilder, or it could be a sign of a man who is boxing because it is all he has known and a sign of a man who will never return to true prominence, his career finished before his 23rd birthday.

How Lemieux behaves when he gets hit—and against a former world titlist in Alcine, make no mistake, Lemieux will get hit—will tell us if he is a fighter who has matured and improved and is ready to get back on track…or if he is a guy who is on the fast track to Palookaville, never to sniff the true glory of a world title, just a puncher who could only hit until he got hit back. Fans can catch this fight on Fight Now TV at 7:30 Eastern/4:30 Pacific live from Montreal.

Fox Doucette covers ESPN Friday Night Fights for The Boxing Tribune. His weekly column, The Southpaw, appears on Thursdays. Fan mail, hate mail, and a pack of Certs (it’s two, two, two boxing columns in one!) can be sent to beatcap@gmail.com.