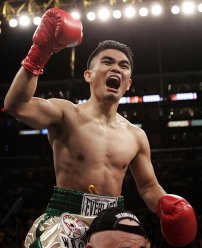 Viloria (30-3, 17 KOs) beat former junior flyweight champ, Giovani Segura (28-2-1, 24 KOs) by TKO in the eighth round due to a grotesque, Hasim Rahman/Pawel Wolak-like swelling on the upper right side of Segura’s head.

Viloria, even without the injury to Segura, was well on his way to a unanimous decision win as he completely controlled the contest with outstanding timing and smart movement that often had Segura lunging forward, helplessly.

By the end of the third round, the right side of Segura’s head was already swollen and disfigured and a target for Viloria left hands. The end of the bout came in the eighth round, shortly after a nice left hand counter once again landed on the bulging, stretched-out swelling.

A brief stumble after that shot was enough for the referee to call the contest. At the time of the TKO, Segura had lost all but the first round on The Boxing Tribune’s unofficial scorecard.