Eventually, people are just going to have to give the Klitschko brothers their due, right? The last time either one of them lost was over 7 years ago. Since then, they’ve reeled off an incredible string of 24 straight combined wins. Not 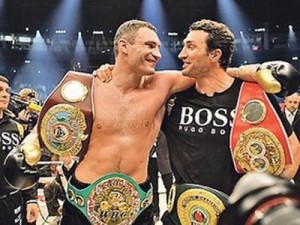 many heavyweights in history have been as dominant, and they aren’t likely to lose anytime soon.

For Wladimir Klitschko (56-3, 49 KOs, IBF, WBO, WBA Champ), 2011 was the year he finally faced his supposed rival. After numerous postponements, Klitschko met David Haye inside the ring in Hamburg, Germany on July 2nd. The build-up to the fight was fantastic. It was arguably the biggest heavyweight event in a decade, but the fight itself proved to be a mismatch. The brash talking Haye talked the talk, but walking the walk took more good toes than he professed to have after the fight when he shamelessly claimed he had a secret toe injury which kept him from being competitive. Still, the event was quite the spectacle and minimally got people talking about heavyweights again.

Older brother Vitali Klitschko (43-2, 40 KOs, WBC Champ) did just as well. Klitschko quickly dispatched the previously unbeaten Odlanier Solis when the Cuban’s knee seemed to give out from the sheer terror of being in the ring with the meaner Klitschko brother in March. In September, Klitschko put a beatdown on the very game but overmatched Tomasz Adamek to solidify the fact that when any fighter in the division faces a Klitschko brother, his prospects are less than grim.

The brightest heavyweight prospect at the beginning of the year in 2011 is still just that at the end of it. Alexander Povetkin (23-0, 16 KOs) finally stepped up a bit in class to face former titleholder Ruslan Chagaev in August where he notched a very good win by UD, but then in December he knocked out journeyman Cedric Boswell which indicates he’s still on the longest road possible to braving the deep waters against the best of the division.

Meanwhile, a guy that probably could have used a bit more seasoning himself before heading a Klitschko’s way, started rebuilding his career back to contender status. Chris Arreola (34-2, 29 KOs), after a difficult 2010 campaign, came back in 2011 fit, trim and ready to make his mark. He didn’t fight any world class opponents, but he did stay active and dedicated to his craft. Arreola has won 5 fights in a row and has the looks of someone ready to contend again for a title in 2012.

Eddie Chambers (36-2, 18 KOs) stayed relevant by defeating Derric Rossy in February, but a back injury forced him to sit out the remainder of the year. Chambers is a good boxer with fast hands and his plan for 2012 includes a network television date with Siarhei Liakhovich. A win there could spring him back to bigger and better things.

Tyson Fury (17-0, 12 KOs) continued his unbeaten ways and elevated himself to Commonwealth champion in the UK. Fury’s 4 wins in 2011 included thrilling victories over Dereck Chisora and Neven Pajkic. 2012 should be the year Fury’s fans will be able to see if he can compete at a global level.

Finally, real life American heavyweight prospect revealed himself in 2011, and his name is Seth Mitchell (24-0-1, 18 KOs). The former college football star, who dedicated himself to boxing after a knee injury at Michigan State University, burst on the scene in style when he busted up former contender Timur Ibragimov in just 2 rounds this month on HBO. It was his fourth win of the year, and for better or worse it did more to excite the boxing public this year than any other heavyweight in the division including the Klitschko brothers.