Taylor dominated throughout and performed as expected against a fighter whose greatest claim to fame is “looking tough” in a TKO 4 loss to Fernando Guerrero in 2009. It’s hard to assess whether Taylor is 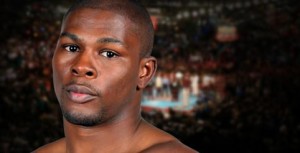 anything close to the fighter he was as undisputed middleweight champ or, for that matter, if he’s the same fighter that he was prior to being brutally knocked out by Arthur Abraham in his last bout.

With Taylor doing pretty much what he wanted, whenever he wanted, the only real intrigue of the bout came in the sixth, when Taylor had a point deducted for hitting after the bell. Other than that, it was smooth sailing for the Arkansas native.

Kudos to referee Ray Corona for saving everyone six minutes of life by stopping the fight prematurely in the eighth round. At the time of the stoppage, Nicklow was not seriously hurt but was hopelessly behind in the bout and had shown absolutely no answer whatsoever for anything Taylor did.

In the co-feature, Andre Dirrell (20-1, 13 KOs) came back from 21 months of inactivity with an impressive second round knockout of Michigan club fighter, Darryl Cunningham (24-3, 10 KOs).

After an uneventful first round, Dirrell came out with a more aggressive second that saw Cunningham buzzed and unable to recover.

Halfway through the round, Dirrell would drop and seriously hurt Cunningham. However, while referee Pat Russell attempted to get Dirrell to a neutral corner, Cunningham, who had beaten the count, would have a few seconds of a breather and even enough presence of mind to kick the towel out of the ring that his corner had thrown in.

Seconds later, when action was restored, Dirrell dropped Cunningham again and Cunningham would once again beat the count. This time, though, Cunningham’s corner would succeed at throwing in the towel for their fighter.