Sports are best enjoyed outdoors. Whether it’s outdoor hockey in Philadelphia or college hoops on an aircraft carrier, it’s nice to see an indoor event go out into the open air. Friday night in Key West, Florida, under the bright lights of the Worldwide Leader, Dyah Davis (20-2-1, 9 KOs) takes on Alfonso Lopez (22-1, 17 KOs) in a battle of fringe prospects to open the year. The co-feature gives us 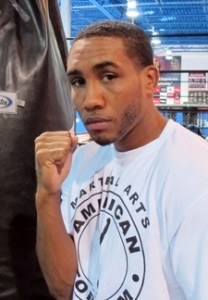 an intriguing matchup between unbeaten junior middleweight up-and-comer Steve Martinez (11-0, 9 KOs) and Philadelphia-based Denis Douglin (13-1, 8 KOs) in what for the latter man is probably a must-win fight.

Dyah Davis is known to the FNF faithful as a bit of a who-dat, as in he’s been mentioned as an opponent who fought against guys who then fought on ESPN. Aaron Pryor Jr., who fought as the co-feature the last time ESPN went to Key West a year ago, had fought Davis immediately previous to that fight; Pryor beat him by eight-round unanimous decision in November of 2010, but found no success beyond that (in addition to the loss to Edwin Rodriguez on FNF, Pryor also got beaten silly by Thomas Oosthuizen and Adonis Stevenson last year as well.) Davis also fought Francisco Sierra to a draw, who then went on to come in as a light heavyweight in a super middleweight bout on FNF, losing to Jesus Gonzalez despite the eight-pound weight advantage. Sierra also fell victim to Thomas Oosthuizen as well (by 11th round TKO), laying bare the Kevin Bacon-esque degrees of separation in the crowded super middleweight fringes.

Point being, Dyah Davis is still a question mark. The guys he’s beaten have not been world-beaters themselves, and the guys he’s lost to (Pryor and a club fighter named Tyrone Watson, who would go on to fight only three more times before quitting the sport after getting his brains scrambled in the first round of his last fight) have been even less than that. Davis’ biggest win was against the unbeaten-in-20-fights Marcus Johnson last April.

Meanwhile, the guy standing across the ring from Davis is experienced and tested; his one big fight was a loss to Kelly Pavlik by majority decision on the Pacquiao-Mosley undercard last May. Mind you, the drawn score on Adalaide Byrd’s card was preposterous, but the fact remains that Alfonso Lopez gave a once-great champion a fight. Lopez has otherwise beaten club fighters and nobodies, but he has done so with sufficient display of power that you could grant him the “knocks out guys he’s supposed to knock out” label. Davis has beaten guys like that before; Friday night, we will see if he can beat one again.

Meanwhile, in the co-feature, Denis “Momma’s Boy” Douglin continues his quest to prove that his knockout loss to Doel Carrasquillo (14-17-1 at the time of their fight, but with a strength-of-schedule that would make the BCS committee tip their caps) last year was simply a fluke, a speed bump on the road to greater things. The Boxing Tribune’s Gary Purfield interviewed Douglin for a feature on this very site; when Gary asked Douglin about that loss, Douglin said “I’m actually now grateful for the loss. Although it pushed my career back a few months and I have a lot of doubters now. It let me see who was really in my corner and it got me a lot more focused.” For the observer, it is reminiscent of guys like Hank Lundy and John Molina and other FNF veterans who have taken their first loss and attributed it to their own lack of focus and belief in their own invincibility. A fighter like that often comes out of the experience more mature and less prone to taking his opponents for granted; it is then that he reaches his true potential.

Addressing that very point in his interview with Purfield, Douglin said “I let myself get into a lackadaisical state of mind because I just got signed by Al Haymon and I was undefeated. I just felt like the world was mine and I took everything for granted. Now I’m back hungry, I’m still with Al Haymon, but of course I’m not at the top of his list anymore which I understand 100%.” Douglin is saying all the right things, but it falls to him to go into the ring and prove himself in front of a national TV audience.

Standing in his way is Steve Martinez, with a lot of power but not a lot of pedigree. He has eleven fights, but all of them have come in New York and New Jersey save for one trip to Las Vegas early in his career. Mind you, the New York club circuit is a lot tougher than, say, the Missouri or Deep South club circuits common to opponent-level fighters on ESPN. His last five opponents had a combined record of 44-21-4 with 23 KOs between them; not exactly world champions but far from freight-train hobo bouncers. It will be interesting to see how ESPN frames this bout in the pre-fight analysis; will they focus on the unbeaten New York club fighter looking to step up to true prospect status or will their attention be focused on Al Haymon’s Philadelphia prospect looking to reclaim that status in the eyes of both his promoter and the fans? The fight itself promises to be a great clash no matter how it is presented.

Friday Night Fights airs at 9 PM Eastern/6 PM Pacific on ESPN2 and ESPN3.com on Friday, January 6. The Boxing Tribune will have a full recap of all the night’s action following the conclusion of the program, and our own Fox Doucette will be on the ESPN Friday Night Fights Facebook page providing round-by-round scoring and insight throughout the night. So come join the show.

Fox Doucette covers Friday Night Fights for The Boxing Tribune. His weekly column, The Southpaw, appears on Thursdays. Subscribe to his updates at facebook.com/MysteryShipRadio. Fan mail, hate mail, and females can be sent to beatcap@gmail.com.