Former junior flyweight world champ, Edgar Sosa (43-7, 26 KOs) returns to the ring this Saturday, January 7th against Filipino, Roilo Golez (13-7, 5 KOs) in a twelve round flyweight bout staged at a venue to be named in Sosa’s hometown of Mexico City.

Sosa, who made ten straight title defenses of his WBC junior flyweight belt from 2007 to 2009, was 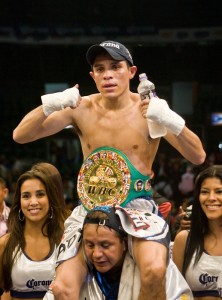 defeated via unanimous decision last October in a bid to take the WBC flyweight title from long-time champ, Pongsaklek Wonjongkam in Thailand.

The Mexican battler is fighting for the first time under the supervision of new conditioning coach, Fernando Barrera.

Golez, who has fought all but one bout in the Philippines or Thailand, is best known for a TKO 5 loss to Sammy Gutierrez at junior flyweight last October in Puebla, Mexico.