Philadelphia-based junior featherweight Teon Kennedy (17-1-1, 7 KOs) looks to recover from an awful 2011 personally and professionally against light-hitting San Diego native Christopher Martin (23-1-2, 6 KOs) in the main event of ESPN2’s Friday Night Fights this Friday, January 13th. In the co-feature, Cuban Yordenis Ugas (10-0, 5 KOs) looks to join the ranks of his 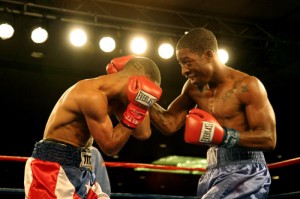 more famous brethren from the land of Castro and sugarcane against sacrificial lamb Esteban Almaraz (10-4, 4 KOs).

Kennedy had some telling statements when The Boxing Tribune’s Gary Purfield caught up with him in the gym in Philadelphia; he insists that he is a boxer and a defensive fighter, but when asked “Do you find that your plan is boxing, but when you get hit in a fight you get caught up in a war?” Teon answered “It’s not that I get hit but a little of the crowd also, it gets you going and you make sure they have an exciting fight.” An exciting fight will be just what the doctor ordered after FNF started the season with a dud of a main event last week; the only question is whether Martin, himself not a big puncher, is willing and able to engage Teon Kennedy and make the fight an action-packed battle between people willing to chuck leather rather than a clinch-and-grab festival.

Teon Kennedy lost his last fight five months ago against Alejandro Lopez.  But if ever a fighter had a legitimate excuse for a loss, the criminal charges against Kennedy for attempted murder, aggravated assault, and weapons violations in a crime that Kennedy did not commit, would certainly qualify. Floyd Mayweather’s domestic violence issues and 90-day sentence are small change compared to what Kennedy went through, and to attribute the loss to stresses beyond the endurance of any man would be entirely forgivable if… (and this is key) Kennedy is able to win on Friday night. Before the Lopez fight, Kennedy was a solid prospect; if he wins, he should surely remain so.

His opponent in the bout, Christopher Martin, has a couple of wins over undefeated fighters to his name, but he too is coming off a loss, a ten-round split decision to Jose Angel Beranza (33-21-2 with 26 KOs at the time of their fight three months ago). Beranza was a former flyweight; Kennedy has fought as high as junior lightweight. It will be interesting to see whether this fight, should it descend into a brawl when the action heats up, will favor the naturally stronger man. The matchup is intriguing; ESPN matchmakers hope the fight will be the same.

The co-feature has showcase fight written all over it. Esteban Almaraz has on his resumé decision losses to Ruslan Provodnikov and Hank Lundy, names that should be very familiar to FNF aficionados. Almaraz has gone the eight-round distance at which this fight will be contested three times and has never been stopped, but a look at his record and the quality of his opposition suggests he is a hand-picked opponent for the up-and-coming Cuban Yordenis Ugas.

Ugas doesn’t get the press of a Yuriorkis Gamboa or Guillermo Rigondeaux or even a fallen star like Yordanis Despaigne, but he has compiled a 10-0 record largely on the hobo circuit since turning pro in 2010. Ugas does not appear to have knockout power against anybody with even the faintest semblance of a chin, and he has yet to fight anyone above the C level of the sport. This is a chance for ESPN to introduce us to a new prospect and fans should be under no illusions that this will be either a competitive fight or a swift knockout.

All in all, this does not have the look of a classic fight night; fans looking for slugfests and knockouts would be advised to wait two weeks for Ruslan Provodnikov and Ji-Hoon Kim, who are scheduled to fight in bouts at junior welter and lightweight in two weeks’ time. But for fans looking to familiarize themselves with new blood in the ranks of the prospects at 122 and 147 pounds, Friday’s event will offer plenty of get-to-know education.  The fights air at 9 PM Eastern/6 PM Pacific on ESPN2, ESPN3.com, and on ESPN 3D for the first time this season. The Boxing Tribune will have a full recap of the night’s action, and we invite you to join Fox Doucette on ESPN’s official ESPN Friday Night Fights Facebook page during the fights for round-by-round coverage.

Fox Doucette covers Friday Night Fights for The Boxing Tribune. His weekly column, The Southpaw, appears on Thursdays. He’s not expecting much this Friday but hopes for a good scrap. Fan mail, hate mail, and authentic Cuban empanadas can be sent to beatcap@gmail.com.