Six months ago, Philadelphia featherweight Teon Kennedy was right where he wanted to be.  Undefeated and knocking on the door to a title shot.  Kennedy, who is known as “The Technician” for good reason, had all the necessary skills to make a title run.  In addition to his skills, Kennedy had become known for being someone who had absolutely no problem throwing caution to the wind to engage in a crowd-pleasing slugfest.

Kennedy was coming off a big win earlier in the year.  He took on fellow contender Jorge Diaz on the Gamboa-Solis 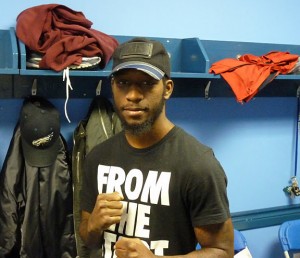 undercard.  The fight was a barnburner that stole the show for the live audience.  The Diaz fight was the culmination of Kennedy being brought along from prospect to contender where he improved his skills, prepared himself for bigger fights and put on a boxing/brawling display that had fans jumping out of their seats for twelve rounds.

But several months after the Diaz fight, Kennedy found himself in a fight with the Criminal Justice system facing several possible charges including attempted murder.  With this cloud hanging over his head on August 13, 2011 at Bally’s Casino in Atlantic City, he entered a fight with little known Alejandro Lopez who was 21-2 (7 KO) at the time.  While Lopez was no pushover, he was considered someone Teon could beat while staying busy and waiting for bigger opportunities.

The slick moving Lopez out boxed Kennedy most rounds en route to the unanimous decision win.  All night Lopez employed a stick and move while the distracted Kennedy chased him around the ring with no real plan to change the tide of the fight.  For those who have seen Kennedy effectively cut off the ring and break down an opponent on many occasions, it was clear that he was not on his A game.  Kennedy lost his undefeated record and his NABA title in a fight he was favored to win while still having the possibility of a court date with serious consequences hanging over his head.

Since that time, all charges have been dropped and Kennedy 17-1-1 (7 KO) has been cleared of any participation in the crime.  Now Kennedy has the opportunity to get right back into contention as he headlines this week’s ESPN Friday Night Fights against Chris Martin 23-1-2 (6 KO).  For a full preview of FNF check The Boxing Tribune’s Fox Doucette article.

The question is, which Teon Kennedy will show up Friday night?  Kennedy began his career as a consummate boxer where he earned the moniker “technician.”  As time went along he became more and more susceptible to getting caught into brawls and drawn out wars.  While his fights became incredibly crowd pleasing, many ringside observers wondered if they were the best thing for Teon’s chances of winning and his long term health in the sport.  As stated above, his fight with Jorge Diaz was action packed excitement, but Kennedy probably could have won without absorbing so much punishment.

Moving forward, Kennedy will have to establish his identity.  Is he a boxer, a brawler or someone who can do both?  I caught up with Teon on one of his final days of training at Joe Hand Gym before he leaves for Las Vegas to headline FNF.  He talked about being relaxed and rededicated to the sport.

Boxing Tribune: Your nickname is the Technician and you have always been known as an excellent boxer, but your last several fights you got into a lot of wars.  Do you think you should be boxing, brawling, or both?

Teon Kennedy: Actually both, I mean I’d rather do boxing, but if I have to.  Mostly just boxing though.  Both kind of work for me but I’d rather box and keep my pretty face.

BT: Do you find that your plan is boxing but when you get hit in a fight you get caught up in a war?

TK: It’s not that I get hit but a little of the crowd also, it gets you going and you make sure they have an exciting fight.

BT: The last fight you had some things hanging over your head (criminal charges that have since been completely dropped).  Did that distract you and what went wrong [against Alejandro Lopez on 8/13/11 where Kennedy suffered his first loss]?

TK: Of course I had that stressing me because of the stuff outside of boxing and in my head.  I didn’t know who my opponent was until two weeks before the fight so that kind of played a part a little bit.

BT: Where are you now mentally, opposed to the last fight?

TK: Right now I’m real good.  I’m just focused on my fight.  I don’t have nothing outside the ring to hold me back so I’m good.

BT: Is the last fight playing on your mind coming off the first time losing?

TK: Not at all, it’s not playing on my mind.  I know you can lose some, you can’t always win.  That loss helped me get better.  It helped me work harder in the gym.

BT: What could you have done differently against Lopez that would have changed the outcome?

TK: What I could have done differently was press him more.  I laid back and should have pressed him more, got him tired into the later rounds.

BT: What do you know about your opponent Chris Martin who you take on this Friday on ESPN Friday Night Fights and what do you have to do to be successful?

TK: With him I got to make sure I go to the body.  I never seen anybody go to the body with him yet. I mean he’s a skilled fighter but makes a lot of mistakes I can capitalize on.  It’s going to be an exciting fight but I know I’m gonna beat him.

BT: Do you feel any extra pressure being on FNF that you have to not only win but look good for the TV audience?

TK: No, I don’t feel no pressure on that.

BT: Do you have any plans in mind going forward after the Martin fight?

TK: Anybody, like I said I just want to fight the top guys in a world title bout.  Anybody, I’ll fight anybody.

BT: Anything else you want to say.

TK: Just thanks to my fans out there and keep supporting me.  And my family for being there for me too.