This Friday, from the National Guard Armory in Northeast Philly, Power Productions puts on the first live card of the year in Philadelphia highlighted by several up and comers from the Philadelphia boxing scene.  Junior Middleweight contender Farah Ennis headlines the card while 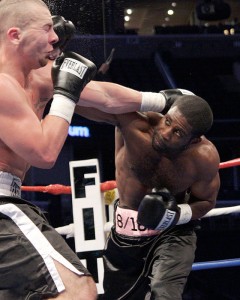 The Philadelphia native, Ennis 17-1 (11 KO) takes on Grover Young 5-4-1 (2 KO) in the eight round main event of the evening.  Ennis was coming along well, winning his first seventeen fights against increasingly better opposition and picking up the NABF Super Middleweight title, when he knocked out Victor Lares in November 2010.  But then Ennis dropped a majority decision to Alexander Johnson in April of 2011.  Johnson was 10-0 (4 KO) at the time.

Ennis has been out of action since the loss, and now “the Quiet Storm” makes his return to the ring.  His opponent, Grover Young does not have the best record, but all four of his losses have been against undefeated fighters so he has experience against quality opposition.  Ennis will look to rebound while Young will try and disappoint the home crowd.

In the co-main event undefeated lightweight Angel Ocasio 6-0 (1 KO) takes on his best opponent so far in a six round bout vs. Jason Sosa 4-1-1 (1 KO).  Ocasio is from North Philadelphia and Sosa is from nearby Camden, NJ so both should have their share of crowd support.  Sosa is 4-0 against fighters from Philadelphia, with his one loss coming by first round knockout against Treysean Wiggins of New York.

Ocasio has considerable boxing skills that have his handlers very excited about his potential.  In his last bout against Rasool Shakoor 3-8-1, Ocasio put on his best performance as a pro.  Ocasio showed up in great shape looking far more solid than in his previous bouts.  When this writer asked Ocasio about his conditioning he stated he has taken a lot of techniques from other fighters and gyms and feels he is in just as good if not better shape than his last fight.

If Ocasio has an area that can be improved, it’s that he needs to sit down on his punches and then the knockouts will begin coming more frequently.  He has shown that he has strength and power in both hands but needs to make the commitment to stand and punch with power if he wants to bring the stoppage rate up.

“Actually ya that’s the first fight I started working on sitting down on a lot of my punches. I feel as though a knockout isn’t really important as long as you put on a great show and the fans like it.”

Ocasio is looking forward to his first co-headlining bout and feels he is prepared to put on a show for the crowd.

“My goal is I’m ready to put on a show and I come prepared one hundred percent.”

Also on the card is highly regarded Philadelphia Bantamweight Miguel Cartagena 3-0 (2 KO).  While only three fights into his pro career Cartagena has already created a buzz in the Philadelphia fight scene with his impressive skill set and from his impressive amateur background.  In 2009, Cartagena won the US National Championship and National Golden Gloves Championship.  The nineteen-year-old Cartagena does not figure to be tested much Friday night against Yuniel Ramos 1-5-1.

Tim Witherspoon Jr. 6-1-1 (2 KO) takes on Tevan Farmer 3-2-1 (1 KO) in a battle of Philadelphia Jr. welterweights.  Witherspoon is the son of former two time Heavyweight Champion Tim Witherspoon, Also heavyweight Joey Dawejko 5-0 (2 KO) takes on Corey Winfield 4-8 (2 KO).   Dawejko is a talented fighter but has been criticized for letting his weight and conditioning go.  He has stated he is in much better shape now and is anxious to show his better physique and boxing abilities.

The card has a total of eleven fights and begins at 7:30pm Friday night at the National Guard Armory in Northeast Philadelphia.  This writer will be ringside to cover the action and provide a full recap afterwards.