By the time I became aware of boxing, Muhammad Ali was a mere shell of his former self, plodding through bouts with Leon Spinks, Larry Holmes, and Trever Berbick. It would be much later when I truly understood the legend behind the man.

Now, as he celebrates his 70th birthday this January 17th, there has been somewhat of an effort to downplay his importance to the sport and as a pop culture icon, a sort of backlash to the waves of positive, feel-good press that Ali has enjoyed for the last several years. 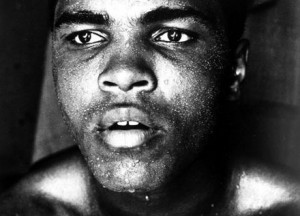 and, in some circles, was a truly hated figure.

Among my circle of relatives and friends old enough to remember the prime Ali, you’d be hard-pressed to find a kind word about him.

It was in spite of this attitude that I came to admire Muhammad Ali, both as a man and a fighter.

Sure, the man had his defects and counted serial infidelity and some ugly political leanings among his greatest human flaws. But a hero isn’t a perfect superman who nobly passes through life doing good deeds. You won’t find too many boy scouts in the blood-splattered world of professional prize fighting. Instead, a hero is a regular, flawed human being who somehow, despite his own weaknesses, finds a way to do super things.

Ali’s refusal to be inducted into military service is his best-known personal, political stance. Resisting the knee-jerk reaction to lash out at someone who refuses to fight for his country, it was truly a heroic move. Ali never would’ve seen battle duty in Vietnam and was told that he’d be spending his service time touring military bases and doing special appearances. Still, Ali refused to bend, even though there was reason to believe that he was committing career suicide by taking this stance. Ali’s refusal to fight for a country that denied him the most basic of human rights was at the core of the civil rights movement.

To me, though, the most meaningful moment of Ali’s career had to do with something as simple as his name.

When Ali converted to Islam and got rid of his Cassius Clay birth name, he was doing more than just getting a new moniker. He was speaking to African Americans who, because of slavery, were denied the basic human dignity of knowing their real, African name. The move also spoke to Latinos and some Asians who bore the names of their conquerors and lost their histories to foreign invaders.

Ali standing up and renaming himself represented empowerment. And his battering of Ernie Terrell, who purposely refused to address him as Muhammad Ali, was the man affirming his status as a man.

His refrain of “What’s my name?” in the Terrell fight still gives me goose bumps and was a seminal moment in my development as a man.

Standing tall and insisting that Terrell call him by his new name represents so much to me and has given me the strength to go forward into situations, in the name of good, where I’m sure to suffer abuse and ridicule. It’s easy to conform and give up…Ali never did that and not only resisted the easy path, but defiantly walked forward with only self-confidence and righteousness at his side.

As a fighter, Ali understood both the game and the sport. He knew how to put asses in seats and he worked harder than anyone to keep them there, putting together a record of 19-3 against fighters listed on Ring Magazine’s list of 50 greatest heavyweights. Every single active fighter could learn a lot from trying to follow in the path of “The Greatest.”

Ali came along in a Golden era of heavyweights that ranged from Sonny Liston and Floyd Patterson to Joe Frazier and George Foreman to Ken Norton and Leon Spinks. And not only did Ali survive, he thrived.

To me, Muhammad Ali was the personification of courage. No, he wasn’t perfect, but I don’t demand perfection in my heroes…I just look for a person who, like all of us, is capable of doing heroic things when the the need arises.

Happy Birthday, Champ. God Bless and thanks for being so much more than a boxer to me.

Autographed Muhammad Ali Signed Boxing Glove. The Greatest of All Time, Muhammad Ali has hand signed this red everlast boxing glove which was witnessed by PSA/DNA. All pieces from this signing session include a numbered hologram for authenticity. Every piece sold by Sportsmemorabilia.com is guaranteed authentic and comes with a money-back guarantee. Guaranteed signature quality. Muhammad Ali is notoriously reluctant to do official signings, making this piece a real gem. We love sports, and we go out of our way to make sure all items we sell our of the highest possible quality. As demand for memorabilia like this increases, items like this will go up in value. If you look at the numbers, you can see why Ali’s pieces are so in demand. Comes fully certified with Certificate of Authenticity and tamper-evident hologram.