Dibella Entertainment will feature a night of boxing at the Roseland Ballroom in New York, New York on Saturday, January 21st. 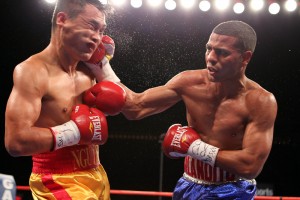 Bracero made his professional debut in March 2001 and has gone undefeated since.  He will make his first defense of a junior welterweight minor title belt in this ten round bout.  Thirty-year-old Bracero has yet to face serious competition in the ring, and on Saturday he will take only his third fight against someone with more than twenty professional fights on record.

Since 2009, Clark has fought seven times, winning four of those by decision and one by TKO.  Of the other two, one was ruled a no contest and the other he lost by TKO.  At 38-years-old, Clark brings experience to the ring, having fought notables Cornelius Bundrage, Mike Alvarado and Carson Jones.

On the schedule is also an eight-round cruiserweight matchup featuring two fighters who fought most of their careers at heavyweight.  Ran Nakash recently had a shot at the WBO Cruiserweight Champ, Marco Huck, but lost by unanimous decision.  Southpaw fighter, Derek Bryant, has won two of his last four fights, one of those losses coming against American heavyweight prospect, Seth Mitchell.

In an eight-round featherweight bout, Luis Orlando Del Valle, a decorated amateur fighter, hopes to remain undefeated while taking on a fighter with a lot of experience in Jose Angel Beranza.  Beranza has lost over sixty percent of his fights, but he’s been in the ring with notables Christopher Martin, Guillermo Rigondeaux, Teon Kennedy and Jhonny Gonzalez.

The fight card is scheduled to begin at 7pm eastern.