Former WBO heavyweight champ, Sergei Liakhovich, has gone public with his distaste for Eddie Chamber’s actions related to the cancelled January 21st main event bout on the NBC Sports Network’s debut “Fight Night” show and the reason behind him pulling out of the card after hearing of Chamber’s injury.

Liakhovich claims that Chambers knew about his rib injury two weeks ago, but failed to inform anybody associated with the event. As a result, with just about a week’s notice, Liakhovich felt that he didn’t have enough time to properly prepare for a replacement opponent.

In a press release issued to the media, the fighter from Belarus, who now resides in Scottsdale, Arizona, 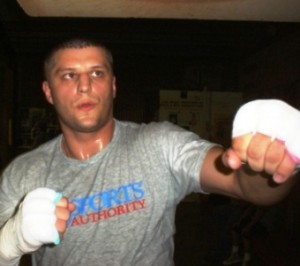 had this to say:

“Eddie Chambers is trying to save face in the press but I want to set the story straight by telling everyone what really happened. Chambers’ medical report about his broken ribs is dated, January 6, 2012. He knew about his broken ribs back then but he didn’t let us know until January 13, seven days before our fight. Instead of shooting his mouth off to the press for a week about how easily he was going to beat me, when he already knew he was not going to fight me, he and his team should have acted professionally and immediately informed my team of his injury. If we had two week’s notice, I have no doubt that finding a suitable replacement and making training adjustments wouldn’t have been a problem, but it was a serious problem trying to do so with only seven days to go before the fight.

“I think boxers like Chambers should be punished by every promoter and networks should know how he operates. He plays the good guy to the press, but Chambers is a fake. He didn’t have the simple decency to tell another athlete about him pulling out of the fight as soon as he knew. It was his obligation to inform everyone immediately. I wasted six weeks of training, as well as the expenses for training camp, and now I’m not fighting because of his actions. NBC Sport Network, Main Events and everyone involved had to scramble to put together a main event at the last minute, all the results of Chamber’s action. He is all talk and no action. So, for now, Chambers is history.”

“Arreola is waiting for another big payday to fight one of the Klitschkos,” Liakhovich commented. “He’s been fighting journeyman after journeyman. How about a real fight with me? I challenge Arreola to take a fight with me. This is a fight boxing fans would love to watch.”