Main Events Promotions and NBC thought they had the right matchup to kick off their Fight Night series that will begin this Saturday from the Arena in Philadelphia and will air four more times in 2012.  Pitting two proven heavyweights in Eddie Chambers and Sergei Liakhovich, to show they would be looking to make even matchups fans could enjoy.

But this is boxing, where if something can go wrong, it will.  Less than a week from the fight Chambers dropped out with a rib injury.  Without enough time to find a heavyweight with enough talent to make an even match with someone of Liakhovich’s talent they were forced to think of another plan.

So in steps two young heavyweight prospects with undefeated records that find themselves in a competitive pick-em fight long before most of today’s fighters dare this move in their careers.  Bryant Jennings 11-0 (5 KO) and Maurice Byarm 13-0-1 (9 KO) will square off with the opportunity to win a headlining TV fight long before either thought they would get this chance. 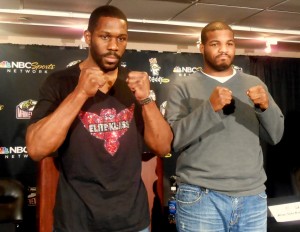 Main Events CEO Kathy Duva summed up the ups and downs of the week with the following:

To hall of fame promoter and matchmaker for the fight night series, Russell Peltz, this is the way it used to be and how boxing should be run.  Let talented fighters test themselves early and often and stop focusing so much on unbeaten records.  Peltz discussed his opinions on what makes a fight worth watching and what he thinks about the current trend in boxing of coveting an undefeated record.

“As the late Teddy Bruner always said, the finest matchmaker their ever was, number one do the styles blend?  Number two is the fight important, is it going to lead anywhere?  Number three, would I buy a ticket to watch the fight?  I say in both cases Saturday night [Jennings vs. Byarm and co-feature Gabriel Rosado vs. Jesus Soto-Karass], the answer is yes.”

“You can forget the fact that every good young prospect has to be undefeated.  It’s a fallacy, it all depends on who you’re in with.  Like I said on the internet today.  There’s more fighters parading around today with 15-0 and 20-0 records than ever before.  There’s only two reasons for that.  They’re either frauds or they’re the next Sugar Ray Leonard, and honestly, I don’t see too many Sugar Ray Leonards around.”

For Jennings and Byarm it is an opportunity to advance their careers while still in the prospect stage.  Jennings who has eleven fights under his belt and Byarm, who has fourteen, get the chance to headline the televised show on NBC Sports.  But with the opportunity comes risk.  In today’s boxing climate many fans and experts put far more weight on the undefeated record than in previous eras of the sport.  But for each fighter it seemed a simple and obvious choice.

I asked each man after the press conference why they chose to take such a risky fight so early in their careers.  Jennings, who was willing to step in and take a bigger risk fighting Liakhovich explained his reasoning.

“It’s important because this is why we fight, this is what we look forward to from our pro-debut.  I don’t look to have a 20-0 record or 25-0 record, I don’t look to be the perfect fighter with a perfect record.  I’m looking to be a perfect fighter.  Sometimes you got to put that undefeated record on the line just to prove whose best, to prove whose better, let the best man win.  If you keep ducking fights, by the time you get to the end, you lose, it drains you so much it pulls away from you and all you’ve done.  It deteriorates the fighter.  So I figure it’s best to take this chance right here early in my career.”

Byarm had the same determination that this was an obvious choice to take the fight.

For Jennings he also sees this as a chance to prepare himself for tough fights later in his career.

“I’ll be better off than guys who continue to duck and who continue to pick around.  I feel as though I’m ready.  I look at a lot of fighters, they get that 22-0, then they get all the way up to near top, in the top ten or whatever.  Then all of a sudden they say this guy’s not ready to fight for the title.  What do you mean?  He’s been in this game for that long, you’ve got all these wins and you’re not ready to be the best in the world.  I’m getting ready right now early in my career.  This is what we do all the way from our pro-debut all the way to the last fight of our career.”

For Byarm he sees this as a chance to push his career to a bigger level with more exposure and more fans.

“It’s going to be great not just for us, but for, most importantly, the fans.  Like I said, win, lose, or draw we’re both going to come out with more fans than we came in with.  I think at the end of this fight they’re going to know us both.”

Saturday night will be a throwback of sorts.  The co-feature will pit two fighters, Gabriel Rosado and Jesus Soto Karass, who have taken 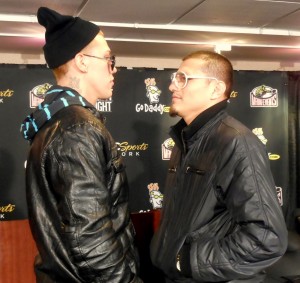 tough roads in boxing instead of the easy way.  They were not matched so they could showcase themselves against lesser competition but because their styles should make for an exciting fight for the fans.  The main event features two talented fighters willing to face each other early in their careers to gain experience and exposure on a big stage.  Something that was done frequently in the golden era of boxing but now is rarely seen.

Bryant Jennings made it clear that his opinion is that fans should get to the Arena in Philadelphia or watch on TV.

“Me and this guy to my left, we the future.  So get ready for the future.  Get your popcorn, get your beer, get your hotdogs.  Get everything, don’t get out your seat, please don’t miss this main event, because it will be something you’re going to regret if you miss it.”