This Saturday Shuler’s Gym Promotions headed by Percy Custus will take their fighters from the gym to the ring for ten scheduled bouts at First District Plaza in Philadelphia.  The card titled Future of Philadelphia Fighters features several veterans and young prospects. 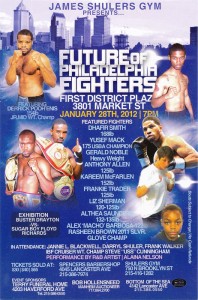 Shuler’s Gym is known for having the toughest sparring in the city and the place to go for exciting gym wars.  The gym, which is officially called the James Shuler Memorial Gym after James “Black Gold” Shuler, is home to Steve Cunningham, Hank Lundy, Yusef Mack, and multiple other tough Philly fighters.

The card is headlined by the return of heavyweight Gerald “The Jedi” Nobles who has been out of the ring for more than four years.  Nobles is 26-1 (21 KO) with his biggest win being a ninth round TKO of former WBA Champ Bruce Seldon in May of 2004.  Nobles’ only loss was later in 2004 to heavyweight giant Nicolay Valuev by a fourth round disqualification for repeated low blows.

The always tough Dhafir Smith takes to the ring in the co-feature against Marcos Primera in a six round super middleweight bout.  The fight is a rematch from a June 2010 bout where Smith won a six round unanimous decision.  Smith 24-22-7 (7 KO) is known for being far more dangerous than his record suggests.  Smith upset Jeff Lacy in December of 2012 and has been a top sparring partner for several title holders, including Andre Ward while preparing to fight Carl Froch.

Primera 20-25-2 (13 KO) has losses to notable fighters Matt Korobov, Darryl Cunningham, Austin Trout, and Josh Clottey.  Primera has lost ten in a row to solid competition since his best win, an eighth round knockout of Curtis Stevens in 2006.

Rising prospect Julian Williams is scheduled to be on the card in a six round junior middleweight bout, but at this time no opponent has been set.  Williams’ 8-0-1 (4 KO) strength and tenacious attack have many excited for what he can do in the future.  Williams, who was signed by Gary Shaw, had a very successful amateur career winning Golden Gloves titles and going 75-10.

The card is rounded out with another six-rounder and seven four-rounder’s.  Knowing the mentality of Shuler’s Gym, the remaining bouts will be well matched for decent and fan friendly action.