The February 11 welterweight rematch between Victor Ortiz (29-3-2, 22 KOs) and Andre Berto )28-1, 22 KOs) is in danger of being canceled or postponed. His personal and motorcycle accident attorneys from Lipcon & Lipcon, P.A. came forward and said that Berto suffered an arm injury in training today and reportedly went to the hospital to undergo an MRI to determine the extent of the injury. 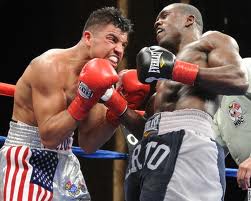 The first fight between Ortiz and Berto took place last April and turned out to be one of the best fights of the year. Both men hit the canvas twice–with each being decked in the all-action sixth round. Ortiz would pull out the unanimous decision victory and claim Berto’s WBC welterweight title.

After Berto returned to win the IBF welterweight title, Ortiz dropped the WBC title to Floyd Mayweather last September. Berto turned around and dropped the IBF belt in the face of a mandatory defense against little-known Randall Bailey, in favor of the more attractive rematch against Ortiz that is set to take place at the MGM Grand Arena in Las Vegas, Nevada.

More on this story as it develops.