Camacho never quite came out of his father’s shadow. His biggest wins came early in his career against Philip Holiday and Rocky Martinez. Now 33, Camacho has not fought since last February when he beat club fighter Juan Astorga. Prior to his win over Astorga Camacho was knocked out in one round by David Lemiuex. 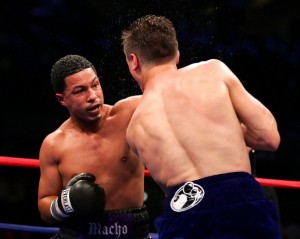 Lewis was at one time a well-regarded welterweight prospect and won a vacant alphabet title in 2001. Lewis held the title for one year before he was brutally knocked out by Ricardo Mayorga, and he hasn’t been the same since. Lewis was knocked out for a second time in 2003, this time by Antonio Margarito. Since the loss to Margarito, Lewis has gone 1-2-1 against club fighter Denny Dalton and a past-his-prime Howard Eastman. Lewis has not fought since 2008.