Angelo Dundee, trainer of more than 15 world champions throughout his career, died on Wednesday evening. He was 90. 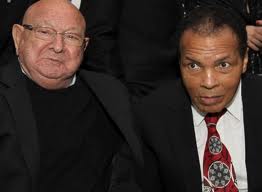 Dundee, who was most known for his work with Muhammad Ali, also worked with Carmen Basilio, Jose Napoles, Sugary Ray Leonard, George Foreman, Jimmy Ellis, and Willie Pastrano. Dundee was inducted into the International Boxing Hall of Fame in 1992, and remained active in the sport late in his life, training Russell Crowe for his part as James Braddock in the movie Cinderella Man, and working the training camp for Oscar De La Hoya’s 2008 fight with Manny Pacquiao.

The cause of death is unknown at this time.